You are here: Home » Uncategorized » April 27th and it’s La Romieu to Condom

Wonderful breakfast at Lily’s and then she dropped us at the boulangerie where we met a couple who we’d seen at dinner last night as well as in the hotel the first night, not sure what nationality they are. From there, fresh bread purchased, we walked to the Epicerie and found wonderful goats cheese and Pate for lunch – the scent of the fresh bread makes you want to eat it immediately but restrain called for.

Today we were heading for Condom, 10 miles away and already we were wondering about trying some of the Armagnac…… 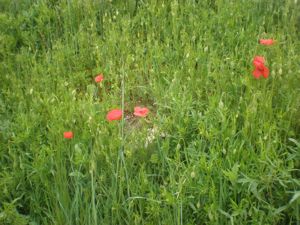 Beautiful poppies in the hedgerows and these wonderful purple flowers too, a little crocus like but not. 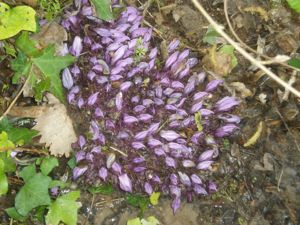 The air had a damp feeling but the rain kept off thankfully, it just seemed to follow at a distance. A nice temperature to walk in actually. Good walking this morning but mud was present of course, how could I not have considered this. 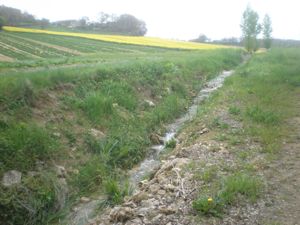 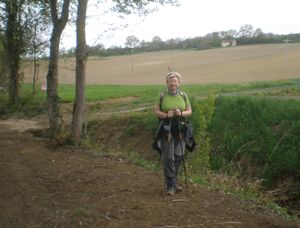 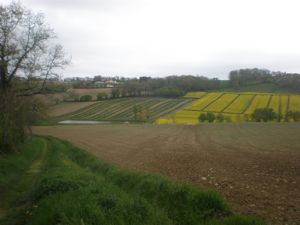 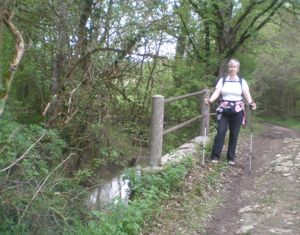 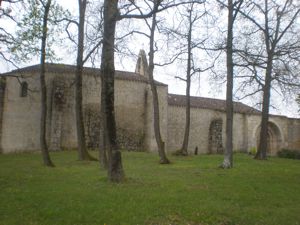 After 6.5km, we stopped at Chapelle Sainte-Germaine de Soldanum, a restored church set in lovely grounds with great views over the countryside.

Had a good break, a snack and a stretch. The countryside had now started to become real vineyard country and here all the cultivated land around the church was vines.

We only had about 9.5 km still to go , a great feeling at this time in the day and as we wanted to explore Condom, it was good to know that we’d have time to do so. 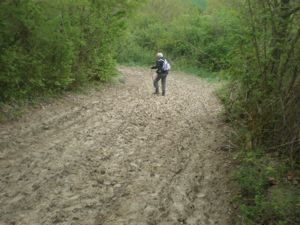 The mud seemed to get worse from this point on and a down hill stretch that seemed to go on for ever had us challenging our balance and the ability of our sticks to keep us upright.

Teresa is doing well and I was very aware of leaving space so that if I did fall I would not take her with me.

At the bottom was stream and stepping stones which wobbled as you stepped on them and with 2/3 inches of mud on your sole it was hard to get a feeling of control. Thankfully we both made it over safely and on to a huge lake, Bousquetara. 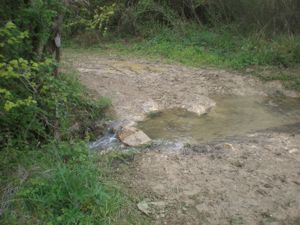 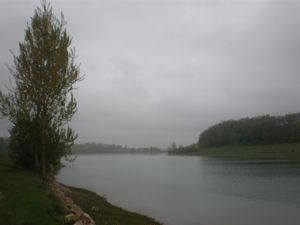 As you can see it was now very overcast and the rain was threatening, we ended up on a ridge where soon we could see Condom in the distance and hunger starting to effect us, we decided to push on and have lunch when we made it to our destination. However before that more mud and although not as steep it was reminiscent of our descent into Cahors a couple of sections back. 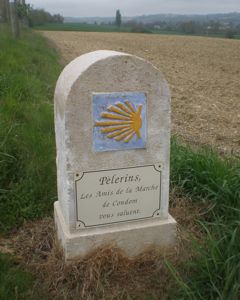 We passed the French ladies who had found a sheltered spot in an old barn for lunch and started to guess the direction that the path would bring us down and where our hotel would be. That was in fact a little challenge but when will we learn that most accommodation is on or near the path and just follow the signs!!

Loved this one. So many different Camino signs, I have quite a collection by now.

We did get there after a quick tour of Condom – it’s not that big so we knew where we wanted to come back to and now feeling really muddy, damp and hungry, we stopped at the hotel door to pull off our boots and once inside climb the inevitable set of stairs to our room. Hurray, we look out over the river and up to the cathedral from where we had just come, great landmark.

Lunch was taken in our room by the window and then we regrouped and went out to explore.

Our first stop was the cathedral of Sainte – Pierre which is situated in the square. It was built in the 16th Century and is Gothic with many wonderful carvings both inside and out, definitely worth a visit. 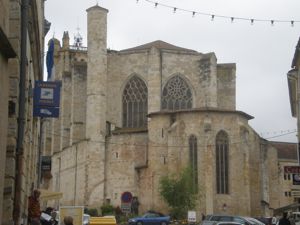 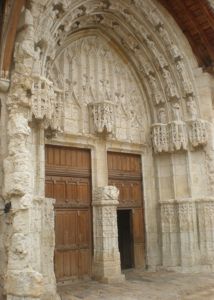 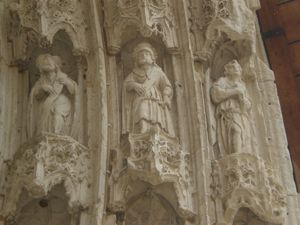 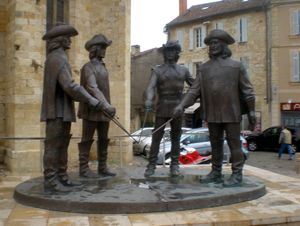 As we left the cathedral to make our way down the street, we were both intrigued to find a statue of the Four Musketeers so wondering what the link was I did a little investigation.

Charles Ogier de Batz de Castelmore, Comte d’Artagnan (c. 1611 – 25 June 1673) served Louis XIV as captain of the Musketeers of the Guard and died at the Siege of Maastricht in the Franco-Dutch War. Also known as d’Artagnan, he was fictionalized by Alexandre Dumas, as the 4th of the Three Musketeers. In fact many, including me, believe him only to be fictional, I now know differently.

After this we came across many statues of d’Artagnan but few quite as eye catching as this.

As well as d’Artagnan, Condom is famous for being the centre of the Armagnac industry and it is this that is sometimes known as the ‘French paradox’, conveniently reputed to be the reason behind the inhabitants’ longevity. Armagnac is distilled at a much lower strength that Cognac and with no added sugar, which gives it a smoother palate. Armagnac itself originates from the Counts of Armagnac, who, on falling on the wrong side of Louis XI of France, were forced to relinquish their estates. Great history.

Teresa and I decided we had to try it but not being brandy drinkers, we had to have our beer first. This is usually sipped in the sun and there was none today. We did sit outside and tried to make it last but got chilled so another one was decided against and we went back to the hotel to enjoy a glass with a coffee or for me hot chocolate. It was good to try it but there is no way I’m going to develop a taste for it.

We’d found the boulangerie on our return to the hotel and the signs showing the way we were to leave and we also met Paddy and the driver of the Australians. They are having a rest day tomorrow so I guess that will be the last time we see them.

Showers, relaxation and then feeling clean and warm we had dinner. As I lay on my bed later I had a great view across the river at the cathedral and watched as the sky darkened and the lit up monument looked wonderful at all times, hard to catch on camera though.

Both our necks and wrists hurt from having to use the sticks so much when trying to keep upright – all part of life’s adventure.