You are here: Home » » Back on the trail again

Up, breakfasted and off on our way by 9.00 feeling a little apprehensive about this steep climb from the bridge. It’s described as the ‘passage sportif’ and you are strongly warned against it. We though, were not going to be put off and didn’t remember it being that bad. 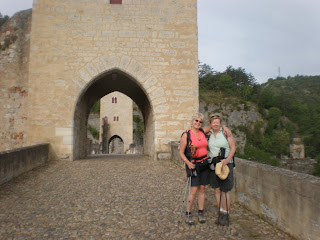 We walked through the town with purpose and remembered our route from the last time and then there was the bridge and a couple of walkers ahead. We wanted to have a photo taken to mark the event and were trying to decide who to ask when a couple of women stopped us and started to chat. One had done the Camino de Santiago from Le Puy a couple of times before and she said she would do it again. She was showing the bridge to her friend and no doubt telling stories of her trips. She was very interested to know about us, where we came from, where we’d started, how far we were going etc so it was so apt that she took our photo. She told us we’d made her day.

Across the bridge and here were our signs, only 1km to the Crois de Magne… but all uphill. 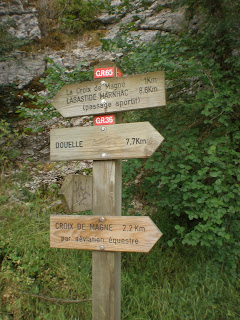 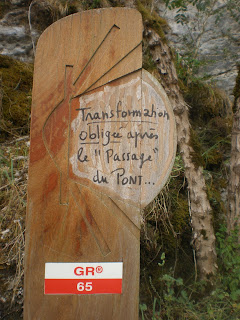 Wonderful views of the bridge as we look back as we climb up. 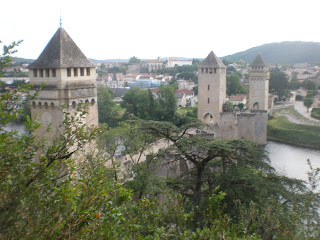 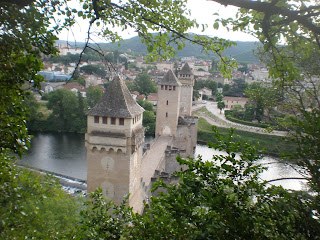 Our climb was nowhere near as bad as we imagined and soon we were up on flatter ground and speculating where this cross was and if it was the one we’d spotted the night before. Yes it was. We came off the track onto a minor road and turning left headed to the cross 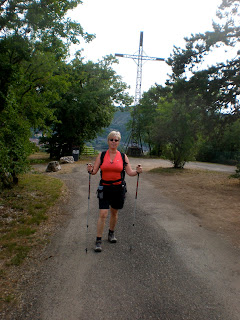 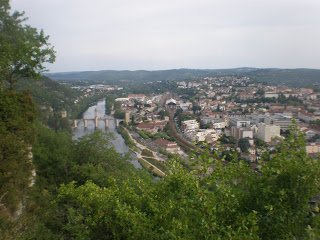 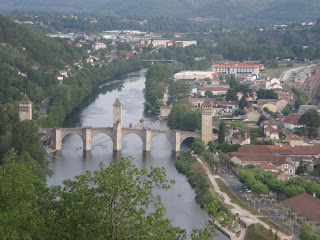 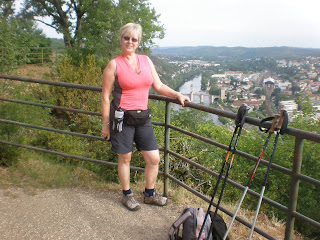 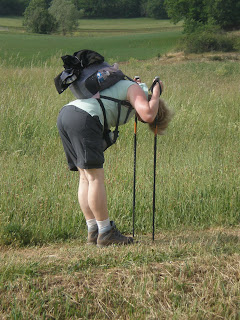 It was fabulous to be up here and looking out over this wonderful scene spotting all the places we’d been and now it was time to throw on the rucksacks again and on to the next place.

We were on minor roads for a while now, firstly to get us up and under the N20 which wasn’t our favourite places to walk.

I was delighted to capture Teresa in a stretch pose, she always illustrates what I need! Important though not to forget to stretch out those muscles especially after a stop – we’d to have that yet.

However, this wasn’t too far away as soon we could see a path that took us off the road and then where we joined it again we came across a wonderful refuge at Domaine de Mattieux. 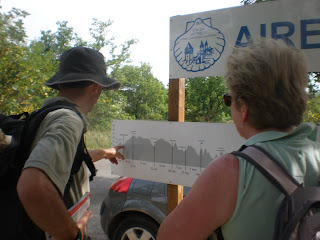 This refuge looked as if it was relatively new and had a pool, a topographical chart which Teresa and a french guy are looking at. It looked at the route and the highs and lows in terms of climbs and descents but the scale was interesting causing us concern for the steepness of the ups!!

We wandered round to the front where we met the lady who ran it. She was delighted to get us some coffee and brought Easter eggs too, what a treat. She also took our photo for us. 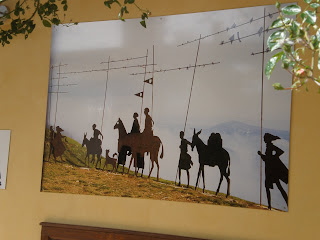 Love this metal sculpture which is on the Camino. Will see it soon, I hope. 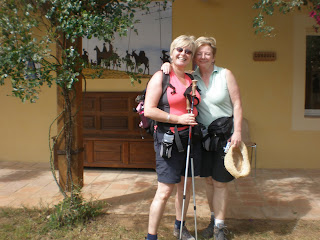 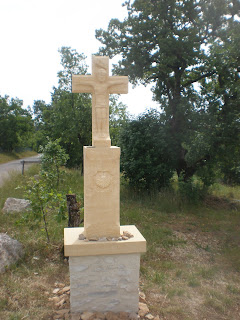 Refreshed and water bottles filled, our rote took us down by the path by this beautiful cross.

Half way down I managed the first fall of the trip. It was steep and stony and I set my foot on a loose stone which just went from underneath me. No damage done except for a scratch and a potential bruise so we got the first aid kit out and applied the arnica cream, well why carry this stuff if it’s never used.

Saw a beautiful purply blue butterfly which was small but managed to flutter around continuously adding wonderful colour. I found out later that’s called an Argus Blue and for me it became a really positive symbol of wonderful walking days ahead. 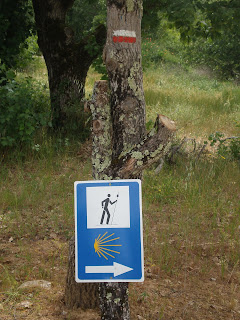 At Labastide, we filled the water bottles up again at the fountain behind the church, this was the second or third time today. At the end of the village by the Mairie we found a little shop, cafe and toilets, all facilities needed by walkers. 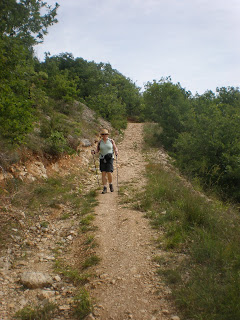 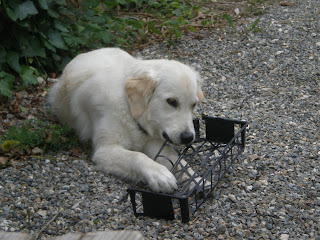 We kept on walking and started to look out for a place to stop and have lunch and finally did so at Trigodina at a farm where a couple of picnic tables had been placed in a shady and sheltered spot. There was also a place to get drinks.

The wonderful food bought this morning was unwrapped and then fruit, nuts etc were added, as usual, a feast and we were then joined by this gorgeous labrador pub who , when he realised there was nothing for him to eat, settled down at our feet to demolish this plastic basket. 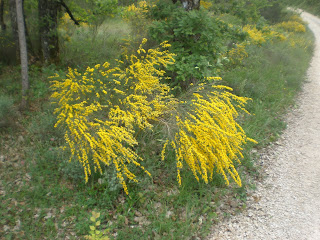 Although very warm, the sky was somewhat overcast and from time to time we’d feel the odd drop of rain and although cooling, it never really came to anything. After we left our lunch spot it became windier too, it was a bit of a strange day weatherwise!

At times during the walk our senses were overwhelmed with this wonderful scent and it took us a while to work out that it was the broom. As a child we had Broom in our garden but it never smelt like this.

We stopped at the chapel and then marched on knowing that we still had about 8 km (5 miles) to go. Thankfully near here we were able to come off road and take a track that would walk us along the ridge.

The rain had started by now and we were enjoying being cooled but on the ridge, also exposed to the wind, the combination was rather cold so we gave in and put on light fleeces, waterproofs would have been just too sticky.

A little more road and then, back on a track, the longest and one of the steepest kms of my life but at last we came down into Montcuq where we’d say the night. It had been a long day of about 20 miles.

It was a pretty town and as many that we would visit this time, a hilltop town dominated by a 12th century keep. Quite soon we saw the sign for our hotel so we followed spotting potential locations but then t took us out the other side and we had just about taken our ruckcasks off at the Rocking Horse Bar for that beer when we realised that the next building was not the hotel and the sign pointed down the hill.

Two rather disillusioned bunnies continued and ended up what seemed like 2 kms on the other side of Montcuq and just before the town limit sign. We were exhausted and yes, you’ve guessed it, or rooms were on the 2nd floor and there was no lift. Also it was 7.00 and dinner was in 30 mins.

Thankfully when I got into the shower, I took the shower head down before running the water but it took about 10 minutes before I got any warm water, I had been about to give up. We were the only guests and dinner seemed as if most of it was out of a tin or packet which is so unusual in France, the vanilla creme brulee was to die for though, the best I’ve ever tasted.

Weary muscles which didn’t get much of a stretch just about got me up to bed and I slept well even though it was chill and Teresa buried herself under spare blankets and additional covers. Tomorrow is another day.