Slept well and it was a pleasure to throw open the french windows and look out onto the garden and welcome a new day. Thankfully, after the tiredness of last night and the lack of stretching my legs functioned well. 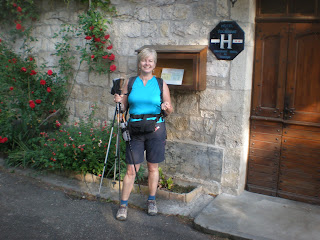 Breakfast was french bread and croissants served in the foyer area of the hotel, washed down with coffee, simple but delicious. The owner explained that there was an alternative route we could take to get us on the path but that meant missing out the town where we wanted to buy some provisions for lunch so after a photo stop to place the hotel in the conscious for ever, we headed off back to town. 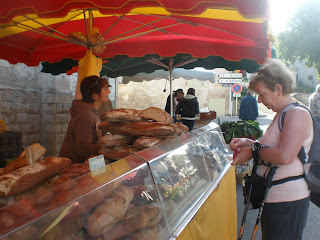 It was market day so loads more people around than yesterday. There was a very buzzy atmosphere and we stopped to buy some local goats cheese and bread.

You  could buy anything from fruit and veg, all very colourful and piled high on the stalls, through numerous different types of cheese, meat products, lavender, flowers, soaps and beautiful coloured baskets.

It was a sunny day, blue skies and of course a climb up and out along the main road but soon the path took us off the road and up a narrow track among the trees. It was very green and shady and lead to a ridge offering great views over the surrounding countryside. 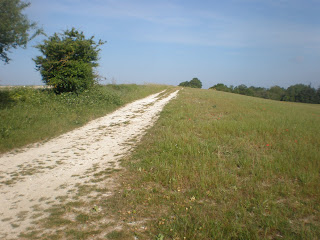 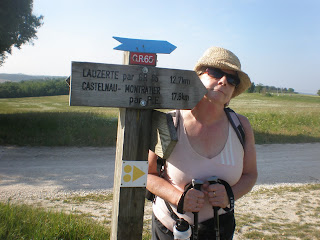 Here’s Teresa looking a little puzzled as she tries to work out which way to go next. Lauzerte is definitely on the itinerary for today so we’ve got it right somewhere.

From this ridge the path entered the woods and passed by the gates of the Chateau de Charry and then to Rouillac where we had a wonderful stop at the church. Here the 12th century church was remodeled in the 15th C with some chapels and a bell tower added in the 19th C. The romanesque frescoes can be seen on the ceiling above the altar, they were worth stopping to see. 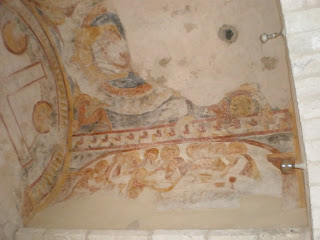 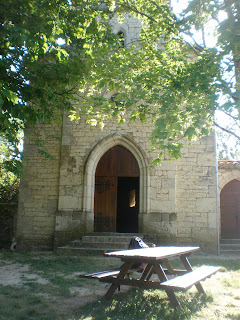 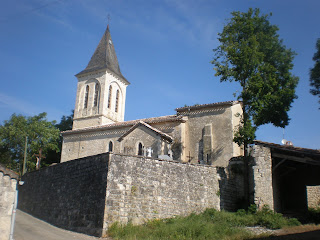 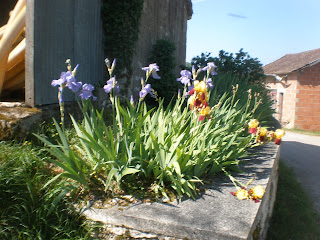 The views from this village were superb and we could see the path ahead from this vantage point. It took us down and then through a farm where a lady on horseback passed us as we walked.

Everywhere there were beautiful irises, not wild but clearly seeded by wind or birds. I saw such an array of colours but my favourites are still the deep blue that tend to be most popular back in the UK.

By this time, we realised that instead of the majority of towns being down in the valleys as in past sections, here the towns were in fortified positions on hilltops. Great views from them but of course you had to get up there first and in this hot weather that was a bit of a feat. At this point we were heading upwards towards Montlauzan with very steep ups and downs and here again I managed to fall. Again nothing serious, just dented pride and at the end of the day the path didn’t actually take us to the town but pilled us away not far from the top – all the effort and no reward of another peak achieved.

We were now in the department of the Tarn and Garonne and foiled by the idea of a break in the shade near the church in Montlauzan, we found a sheltered spot to enjoy nuts, fruit and chocolate. 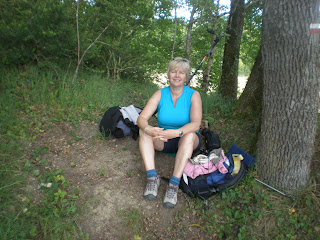 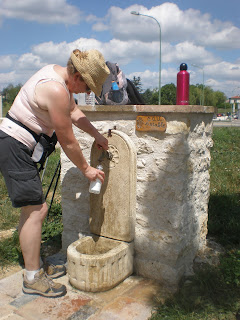 Next stop Lauzerte, which we could see in the distance for a long time before we got there. Thankfully, it got closer and although it was 1.00, the nuts had taken the edge of our hunger so we pressed on. Water was running low as we were drinking gallons due to the heat so it was great to find a pump just off the roundabout before the road climber up to the town. Teresa and I filled all the bottles as today was another long day in high temperatures.

Another beautiful medieval town dating from the 12th C which has had a substantial lot of money spent on its restoration. There were some lovely little shops in the square and we found a bench near the church under the trees which allowed us plenty of space to spread out and enjoy lunch. 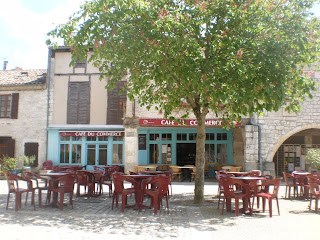 We were starting to see others who we had seen on the trail this morning, our community for this section starting to form through nods and smiles.

Lunch was that great local goats cheese, oatcakes for me and bread for Teresa. Then we had a wander round the church of St Barthelmy with a modern statue of St James inside. 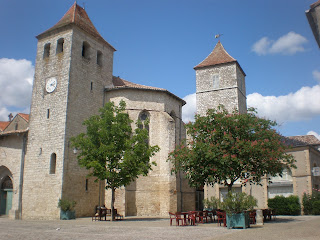 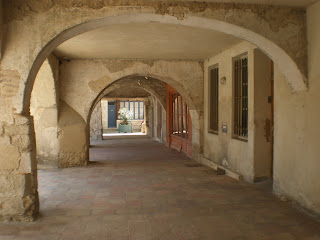 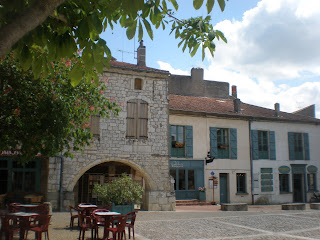 After a good break, we headed off about 3.30 but neither of us had the energy we’d have liked and as a result the rest of the day was a struggle. The heat and the continuous ups and downs didn’t help. Also there were vey few signs so we a no clue as to the mileage we were covering.

One highlight though was to come across the dovecote below. Since I first got the book covering this walk, I often ended up opening at the page which had, on it, a photo of the half timbered dovecote in Quercy. How great to wander round it ans see it for real. 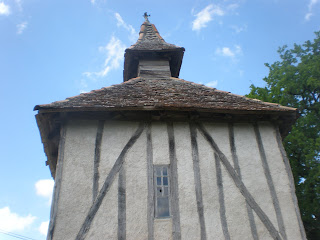 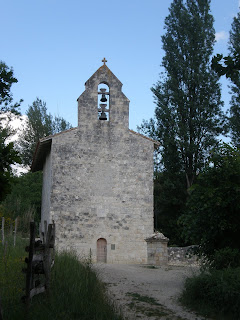 3 kms further from this much photographed sight, we came upon the church of Saint Sernin du Bosc, a small church situated in the valley bottom.

As you can see from this photo, a very plain church but inside there were, on display, a range of photos showing the restoration which was carried out from 1991 onwards.

The church built in the 11th C is of Romanesque origin.

As we left the church and took the path out of the valley and up towards a minor road you can see the beauty of this very green and fertile place where the church is situated. Also very calm and peaceful. 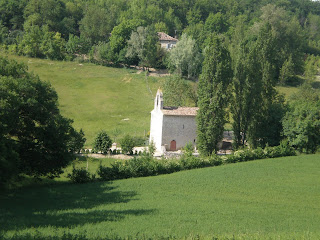 We were now very tired and really looking forward to getting to our destination and this was where we also had to endure over a kilometer of road walking. Now that may not seem like much but when you are tired, hot and lacking in energy it can feel like for ever!

Teresa had developed a headache and the only thing that brightened things was these beautiful cherries. 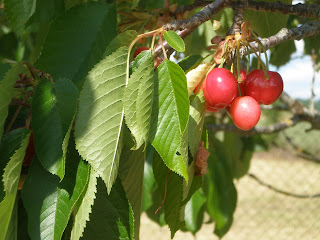 The Auberge seemed never to arrive and we had many ‘false’ sightings and of course it was all up hill when we got there. We were walking up this steep track, hoping that the building we could see was it. Our feet were sore and our heads pounding and yes, this was the right place.

The wonderful owner came out to greet us, she had begun to get concerned and  brought glasses of chilled water as we pulled off our boots. She and her husband also carried Teresa’s bag up to our room which had the wonderful view below from the window. 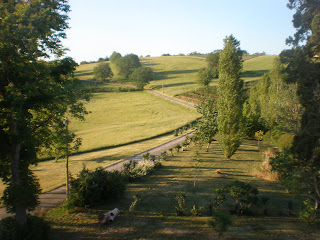 Dinner was due to be served in 30 minutes but she assured us that it would be fine to take a little extra time to have showers and freshen up which we did.

Poor Teresa was not feeling well but did come down and tried to eat some of the vegetable soup starter but gave up and took herself off to bed. I read my book as I feasted on a salad of asparagus, ham and cheese followed by drug leg with vegetables and then the most fantastic fresh strawberries.

When I got up the the room, Teresa was fast asleep and the room was dusky which was great as it meant I didn’t have to put on the light. I stretched for a while, wrote my journal and then slept.