You are here: Home » Uncategorized » Bit of a mystery tour

About 24 kms to cover today , about 15 miles and we’re staying in somewhere off the GR65 so I woner how all of that will work. Fingers crossed.

Overcast when we woke, some thing we’re not used to and it’s due to be only 28 degrees today, that’s a great change from what it’s been. Challenges started straight away though as for some reason we were heading out of town the wrong way so thanks to the motorist who put us right. 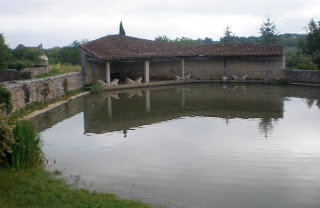 I was looking forward to seeing the lavoir in Limogne as I have a bit of a thing about lavoirs and love the fact that this is where all the women used to congregate to do their washing and probably put the world to rights as we women do now, although we tend to do it over a cup of coffee or a glass of wine!

This lavoir is sizeable and still in very good condition and many of the features can still be seen.

In general, lavoirs are commonly sited where there is a spring or  beside a river. Many like this one have roofs for shelter. Over the years many fallen into disuse although a number of communes have restored ancient lavoirs some of which date back to the 10th Century.

There are also bateaux-lavoirs (lavoir boats) in some towns on the banks of large rivers such asin Paris and Lyon. I have yet to see one of these.

We are in Quercy and truffle territory, this sign appealed to Teresa and I. 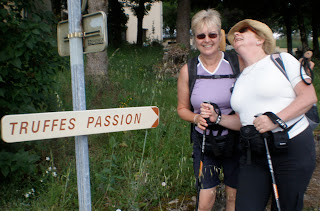 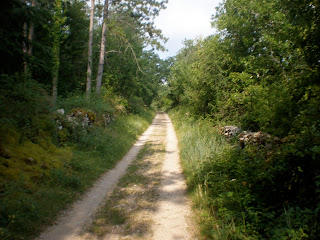 Today we were continuing across the Causse, the limestone plateau and the same water and food restrictions are in place so as usual, we were loaded up.

Our path took us along stony paths and lanes and it was just lovely to be away from Limogne. It was all rather samey but at least there was shade.


We skirted the village of Varaire, passed through the hamlet of la Plane, saw the farm at Les Bories Basses and in Bach, named after the German family who settled there in the 18th century, we settled down to a delicious lunch of bread and cheese at a shaded picnic table beside the church.

Here we saw a number of our fellow walkers that we’d bumped into along the way. There was no water or toilet facility here but on our way out we did see a restaurant so stopped for coffee and ice cream and an opportunity to fill bottles and visit the loo. 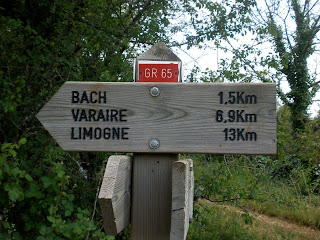 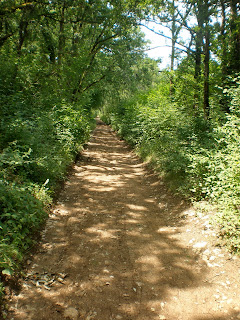 Not long after Bach the GR 65  becomes one with the old Roman road, the Cami Ferrat or ‘iron path’ as it used to be paved and it continues for 15 km.

We were following it until the D55 where we would leave it to get to Lalbenque. Like all Roman roads it’s fairly straight and level and thankfully for us, shady or semi shady. we found it a pretty path to walk on.

The next bit of our journey turned into a bit of an adventure, it seemed to be a bit of a theme this time. We followed our directions and crossed a lovely stream which was much more in flood than we thought. Thankfully there was a boulder block bridge to cross by so no paddling required.

At this stage we were wanting a sign post with some idea of distance and when we came to what we presumed was the D55 from the map, we were disappointed to find no indication that this was true.


We decided to call Ann at World Walks but she wasn’t there. However her colleague said he’d investigate and get back to us. We sat and worked out options and also decided we’d call Alan and get him to do a google earth search.


No-one available and no response from the colleague so we called the hotel who told us to go to Mas de Vers and turn left there so we did and although that meant a 4km walk along an unshady road at least we got there. 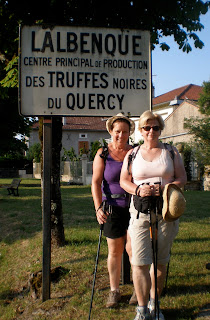 This small town in the department of the Lot, south east of Cahors is one of the principle players in the world of truffles.
The village’s main attraction is the weekly truffle market which is held every Tuesdaybetween December and March. This market is classified as a site of ‘Remarkable Taste’

For those of you not sure what a truffle is, it’s a fungus which grows underground around the roots of trees, often oak trees.

I quote “There are several species of truffles, but the only one that really interests the gastronome is the noble species known as the black truffle Tuber melanosporum Quercy called by botanists.

The truffle tree is noticed by the presence of an area without grass resulting from the action of the mycelium and usually located around the trunk. This area is usually circular a few meters in diameter and is called “burnt”. In general, the tree is an oak truffle pubescent but it can be an oak or hazel.”

The truffle is born in the soil from May to June, develops during the summer months in favor of rainstorms, especially those of August and begins to mature with the first frosts of autumn. We weren’t there at the right time of the year. 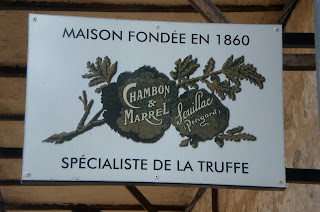 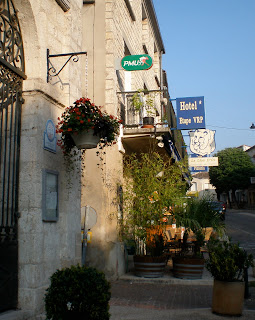 Our hotel tonight was a bar with rooms really and only a 1 star but the welcome was great and after putting our stuff in our rooms we came down to enjoy a beer or two in the sun. In fact we all got a bit squiffy and giggly, it was great fun.

When we’d showered and arrived down for dinner, the owner had set the table on the terrace where we’d had our beers and we feasted on a wonderful meal. I had goose gizzards followed by duck with truffles and then desert. I shouldn’t have had so much but it was fabulous and this was one star!

I very much needed to go for a wander afterwards an walk off some of what I’d just eaten. For us it’s also a chance to see a little of the town and find out where we can buy food for tomorrow’s lunch. 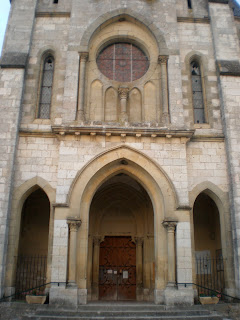 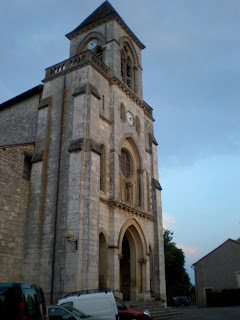 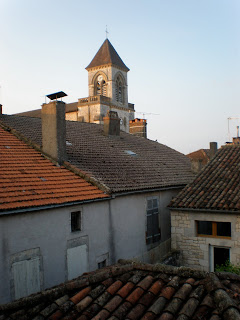 Different views of the church in that lovely evening light, the last one being the view from my bedroom window.