You are here: Home » Uncategorized » Cajarc to Limogne

Well I wonder what’s in store for us today?

We had some time to enjoy breakfast this morning in our adopted hotel but then our lift arrived to whisk us back to the original starting point in Cajarc. He decided to take us the scenic route along the Lot valley which was beautiful but thank goodness the hotel had held onto the luggage bus for us otherwise we’d have been facing more challenges. From where we set off on day 4 and the day seemed to start off somewhat cooler. 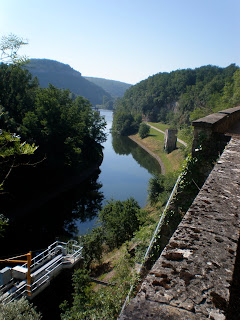 From our point of looking back as in the last photo, we can also look ahead along the Lot and see the path along the river which it would be nice to be on as it’s flat! Not the same views though.

The town of Cajarc is situated in a ‘circus’ of chalk cliffs as is much of the surrounding area. You see more of this entering from Greyalou than from leaving and like many of the towns we’ve visited in the last 2 sections, it has a pilgrim bridge built over the Lot in 1320 and there was a hospital here in 1269.

We were heading southwards to cross a marshy plain in a meander of the River Lot to the lush pastures of Gaillac and then up to the Causse de Limogne where stone is used for everything and where there is no food or water to Cahors, except in Limogne, our stopping place for the night.

This was something to be a little concerned about given the heat and Teresa’s experience of it. We did stock up on as much water as we could carry and bought lunch on our way out of town. 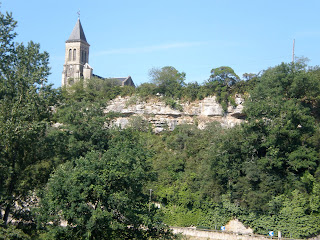 After 4 kms we came to Gaillac, you can see the church in the photo. The path doesn’t go into the village but we decided to visit as we wanted to see the church.

It was a very arty village and there were so many artists clearly living here and everywhere there were art classes happening.

When we got to the church, there was a group of women with their easels set up at different positions around the church painting. We got chatting to the lady who was running the course who is German and lives in the village and runs art courses. 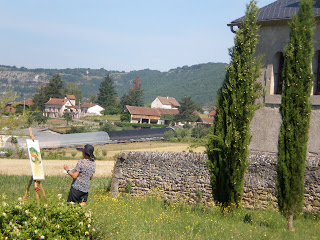 We walked on, the day became rather hot and sticky so we drank as much as we could although keeping an eye on water levels and we also stopped frequently to conserve energy.

With this wonderful outlook in view, we came across a bench built here specifically for us pilgrims. There was a sign encouraging us to use it so we didn’t need telling twice. 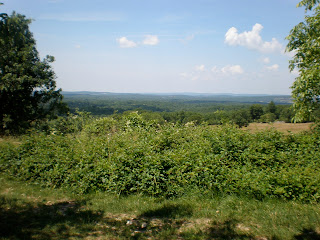 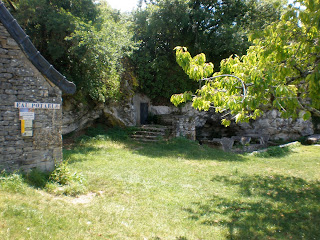 Lunch today was in the hamlet of Mal de Pech. We came across this lovely green and fertile area where there was a tap so we could refill our water bottles, a old lavoir area and shady places where we could sit on the stones and have our lunch. In fact there was so much space to spread out and even have stone tables to put all the food on.

From here it was 10 kms to Limogne which is famous for its truffle market. Further than we’d like but no option but to push on. still amazed at the temperatures. 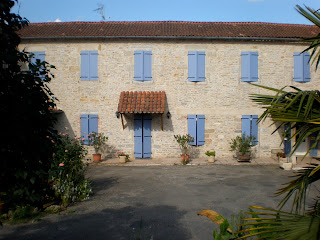 We finally made it to Limogne around 4.30 and found our accommodation fairly easily. The house, more of a gite than a hotel, had wonderful blue shutters and a very welcoming but talkative lady who had a number of rules for us.

About 20 minutes after arriving she showed us to our rooms, very pretty with lovely views in all directions from the one I was sharing with Teresa.

Beer was beckoning as was somewhere with a TV for Chris who wanted to watch the World Cup where England were playing Germany. We did find a bar with a number of English and local people all into the football. Teresa and I choose to sit outside in the shade but it was very busy, good for people watching though. 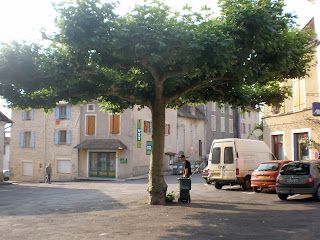 When we arrived the score was 2:1 to Germany and unfortunately the final score was 4:1, poor English supporters. I’m glad to say though that Chris recovered fairly quickly, just bought her another beer.

We went for a little explore although not much to see and I have to say that Limogne is the first place I’ve come across in France where I have not liked the place. It’s very messy, lots of small pieces of rubbish in the streets along the pavements and a bit of a smell in the air too. Looks as if it could do with a good sweep. The next morning we did see a road sweeper under the tree as in the photo but not sure where his cigarette butt ended up?

The place we stayed in was clean and we spent an hour or two washing out clothes, relaxing and reading until it was time to go out to dinner.

We had a voucher for a local restaurant which we’d spotted but were not too enamoured with. However, once we made our way through it and emerged into the courtyard garden behind we were beginning to feel we were in a different world. The garden was beautifully lit and the meal was excellent as was the presentation.

The end of another interesting day.