You are here: Home » Uncategorized » Conques to Decazaville

The sun was shining, breakfast was great – croissants and french bread, fruit juice, fruit and yoghurt and our freshly made rolls were purchased from the bakery across the way from the hotel. Now time to get back on the trail.

Our path took us down the Rue Charlemagne under the Porte du Barry and then across the Dourdou River and up towards the Chapelle Sainte Foy. 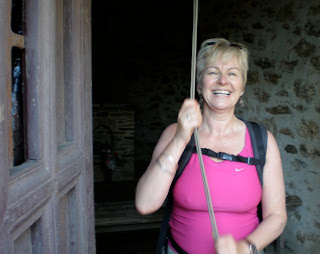 The sun is hot already and as we start to climb, the water starts to be consumed regularly. I’ve always been someone who needs to regulary stop and start on steep inclines and get my breath back. Even at my fittest, this is the pattern that seems to occur, don’t suppose it will ever change.

At least we were climbing up in the trees which made it much better and then we were there, rather sooner and actually easier than we thought.

The story about ringing the bell had been with us since we first heard about it so we all took it in turns to toll the bell and have photos taken. He’s a smiling me, pleased to have got here. 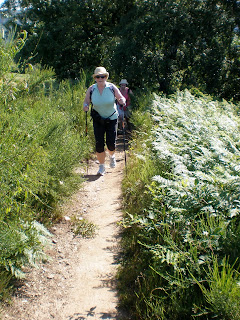 Wonderful views from here on this cloudless day. As you can see Teresa has the hat and glasses firmly in place.

We were really thankful to be doing lots of woodland walking as it was shady and therefore cooler. We also made sure that we had plenty of stops.

We took the non varient route avoiding Noailhac as this seemed to be much more road walking but this also meant loo stops in the bushes and nowhere to buy anything. That wasn’t a major problem as we had lunch with  us and it was a feast after 4.5 hrs walking. The rolls were delicious and I followed mine with a large juicy orange and a handful of nuts and seeds  – delicious.

The paths varied through the day from narrow and smooth, through wider and gravelly and we had the odd minor road too. Variety is always welcomed. 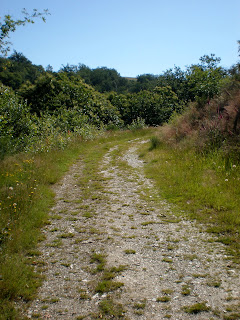 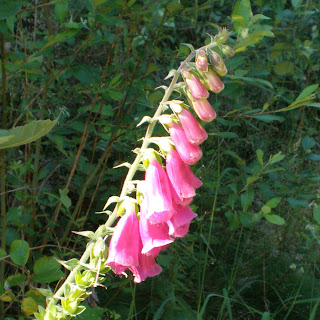 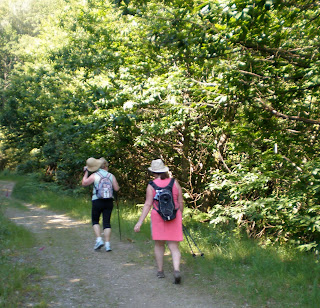 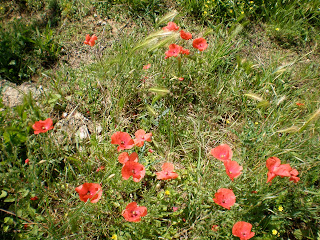 As well as the lovely flowers, we spotted many insects today and some amazing hummingbird thing. We all thought it was a bird at first but it may have been a hummingbird hawk moth as we’ve often seen in the house in Burgundy.

Also saw sheep, horses and cows and pears, apples and grapes growing. It all felt very fertile and ripe, you can understand why the meals are so good with all this local produce used to the full.

We spotted what we thought was Decazaville from a position up top but then we seemed to walk over into another valley and there was another sizeable place which turned out to be it.  The town takes it’s present name from the Duc de Decazes, the minister for industry under Napoleon and is responsible for the promotion of large-scale mining in the area , today it has the largest opencast coalmine in Europe.

It seemed to take ages to get there but I do feel our route was more picturesque and then we started to go down, down, down.

We arrived in the town on the outskirts with very little signage as to where the hotel might be and  with a duel carriageway separating us from what looked like the centre. A couple of questions asked of locals and soon we were in the centre and had found the hotel. Nothing else to do then but to grab the nearest table and chairs in the sun and order in the beers. 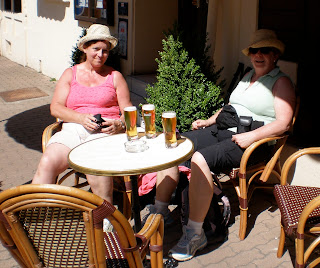 Poor Teresa was rather over heating at this stage and soon after her beer disappeared inside to have a lie down….and didn’t surface again. She clearly had got too much sun but we had been so careful. Her skin though is very fair and it was much hotter than we had expected.

She slept right through till morning leaving Chris and I to explore a little and enjoy a delicious dinner in the hotel.