You are here: Home » Uncategorized » Day at leisure

Friday 6th May and rather strange to find ourself in France and not out early on the path. In fact it was after 8.30 when we woke and on opening the curtains we were blinded by the light. We washed, packed our bags and were able to leave them in the hotel while we went off to get breakfast and explore a little. 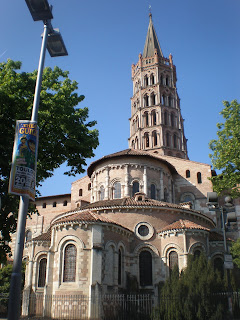 We retraced our steps back to the basilica but no ideal breakfast on route. Instead when we got the the Basilica St Sernin we had a wander round the perimeter and then went to visit, no time like the present.

Basically it was very simple inside but the altar was stunning, very ornate and we were both commenting on how far it was away from the ‘real people’

The Basilica of St. Sernin is the former abbey church of the Abbey of St. Sernin or St. Saturnin. and was built in the Romanesque style between about 1080 and 1120. It’s located on the site of a previous basilica of the 4th century which contained the body of Saint Sernin, the first bishop of Toulouse.

The photos below try to capture this elegance and simplicity. 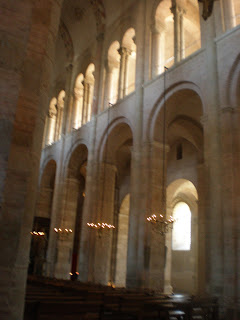 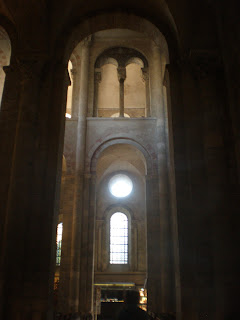 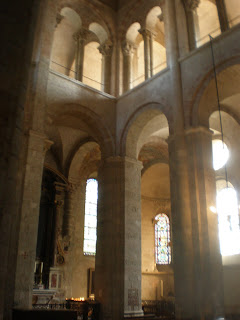 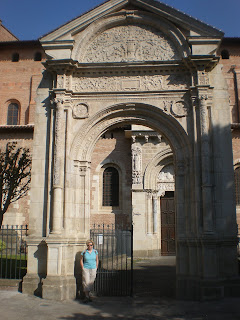 Teresa standing outside in the gateway where the stonework both on the gateway itself and on the doorway, one of the entrances to the church is magnificent.

Still searching for breakfast, we walked up towards the main square and found a cafe serving coffee and orange juic, fromage blanc and coulis and a pain au chocolate, delicious.

In the square there was a market so we wandered, sat on bollards in the sun, explored a few shops and then did what you do in France, had coffee in a pavement cafe in the sun and watched the world go by. 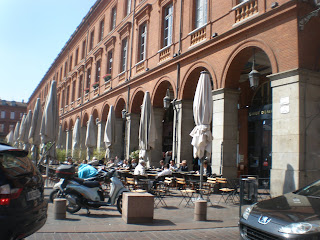 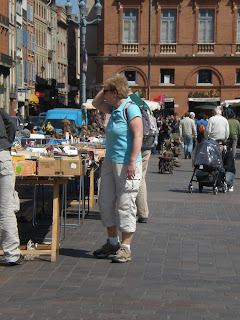 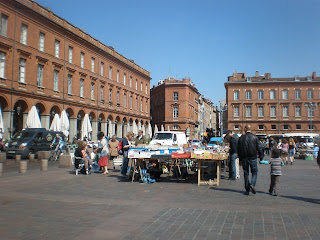 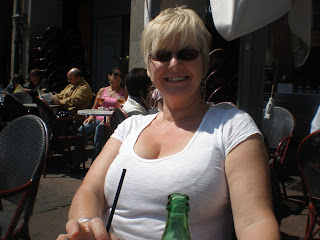 It was at this point that we decided we’d had enough of Toulouse and that we’d rather wander round the old town in Cahors so we went back to the station and made that happen.

It was a lovely journey, how I love train travel and once in Cahors it was so nice to know exactly wher were and how to get to our hotel. It was all doable on foot so cases in tow, we decide to go via the main town centre and it was so lovely in the square, we stopped to have a beer – quite a habit we’ve got into when together. We decided how much we loved this place, I could definitely come back here again for a weekend.

After checking into the hotel, we were off again but without luggage for a wander and I was beseiged with a coughing fit. Apparently it’s the pollen and I did notice it wasn’t just me. Teresa’s eyes were affected too and lots of people around were spluttering too. 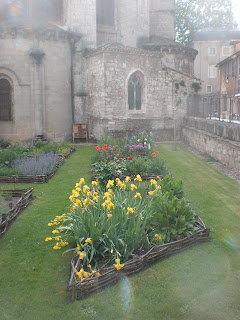 We didn’t go to the bridge as we’ll cross that tomorrow and we’d visited the cathedral but we found ourselves at the back of it  where we found gardens, some used to grow the flowers for the altar and others gardens with herb beds for simple remedies.

Cahors has become well known for its gardens and in recent years, has created some wonderful small gardens scattered throughout the town. You can get a map from the Tourist office to help you to walk Cahors’ garden trail.

The gardens range from the small cloister garden of the cathedral to a beautifully planted roundabout to individual small gardens scattered around the town.

Although we sat in some of the gardens, it was soon time to chill so back to the hotel for a shower and then dinner. This time, we got our Rochmadour cheese in our starter, then I had duck and we both finished with cheese both being given large amounts. Hope there aren’t too many vivid dreams tonight.