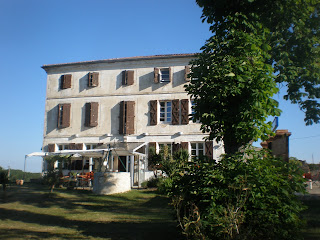 The beautiful Auberge de l’Aube-Nouvelle in the morning sunshine and from our room on the top left, we had a fabulous view down the drive and over the surrounding countryside. Thankfully Teresa felt much better this morning and was up for breakfast – so glad she’s feeling good as it’s so horrible to have to walk if you feel ill. Breakfast this morning was fabulous, yoghurt and fresh strawberries, freshly squeezed orange juice, boiled eggs and croissants and the people who run it are so lovely. 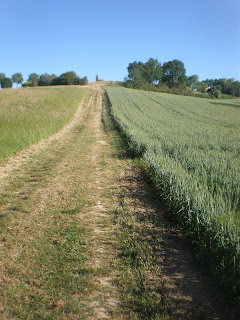 Our destination today is Moissac and it’s a shorter day, I’m really looking forward to seeing the town and it’s Abbey as well as getting to our hotel earlier, it’s been a little full on since we started this section.

Guess which direction we headed as we left? Yes, of course it was up but then we did turn off to the left. The temperature was ideal, warm with a little cool in the air. We had decided that generally we should get up earlier and leave earlier but with today being shorter it was great not having to hurry.

Our journey soon took us into Durfort-Lacapelette but we didn’t see much of the place and were soon off and on a path leading steeply down. While heading down we met a whole mix of people we’d met the day before but this time they were all is different groups, interesting…… 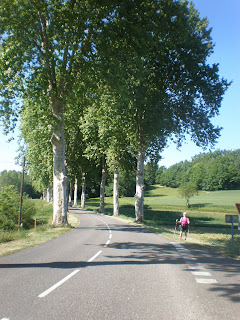 We walked through lots of orchards today and it was really noticeable how well populated this area was and very different from the past sections. There weren’t many places to stop though to get food and water and as it was still very hot, we were a little concerned at how quickly the water bottles were emptying. Even some of the churches didn’t have taps which is very surprising.

From the church at Saint Martin we walked down a minor road which lead onto the D16 which looked very French lined with it wonderful trees on both sides. Our path ran parallel with the road which was excellent and at times it went through woodland and was sometimes just a grassy track, easy on the feet though.

Having said that, I was finding all of this hard going again today. I’m really not sure what’s going on. My legs feel so heavy and really tired and I’m really concerned about all the tension in and around my knees. 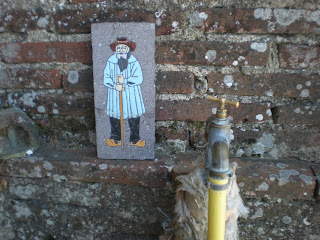 We were looking out for the church at Epis but it seemed a long time coming. We took a break at the top of a gravel lane near Fournaise and then not too much later saw the church in the distance. When we got there, the ladies we’d seen earlier were stopped having lunch in the shade. They were on their 2nd section and would stop before Lectoure. They’d started in Le Puy last year so were covering larger sections than us.

The church itself was closed but there was a tap with a lovely little statue of St Jacques beside it so we filled up. 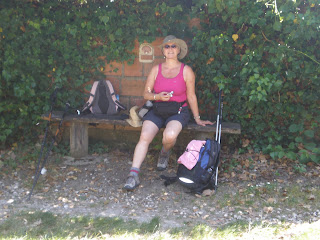 We were then on the ridge for a while and then down to the hamlet of Gal de Merle with lots of new housing. It was very steep and my legs were aching. Unusual for me, I was really wanting to fast forward to Moissac and ‘home’ for the day.

Just before the main road that would take us directly into Moissac and was the easy option, we stopped on a ‘pilgrim’s bench’ and I remembered the Bowen moves that Ivana had taught me. Why had it taken me 3 days to remember this??? It worked well and within a few minutes, yes, that fast,  my legs felt so much lighter. 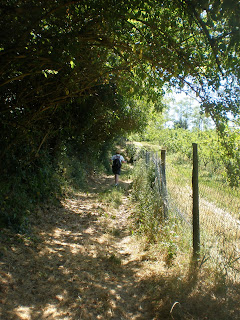 We read about the different routes we could take and of course we decided on the varient route that took more climbing but looked so much more interesting than the direct one.

At the 4th turning on the right off the main road, we headed off the main road climbing steeply through more cherry orchards. At the top it was left and then up a more gentle path through a residential area and from the ridge got our first glimpse of Moissac, the older and much photographed part, which looked great. Could see the river but not the canal, wonder where that is? Of well, we’ll find out tomorrow.

Here’s Teresa climbing ahead of me but the photo doesn’t do justice to the gradient. 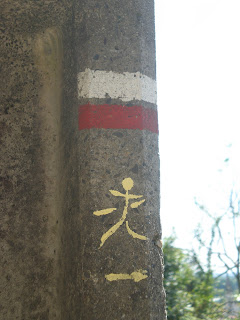 The downs came later and one section which was very steep was on a grassy slope with blue metal benches set at regular intervals for people to stop a while and look at the fabulous views as Moissac unfolded.

As in this photo, someone had drawn a little yellow man to help us know where we were going, so cute and yet another evolution of the excellent signage that is omnipresent on the Camino.

Finally as we got to the end of the grassy swathe, we entered into Moissac close to the Abbey and into a little square with cafe’s and the stunning entrance to the Abbey itself. 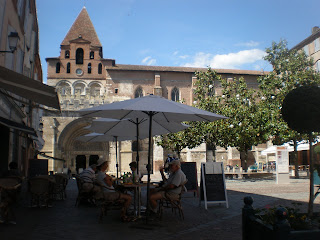 It didn’t take long to find our hotel but the bags hadn’t arrived so we took our back packs to the room, dumped them and headed off back to the square in search of beer and lunch. 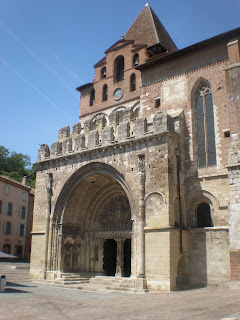 Moissac has been a major pilgrim halt from the Middle Ages onwards and the Abbey Church of Saint Pierre is a former Benedictine monastery founded in the 7th C. The facade is stunning. iThe Saint Pierre abbatial complex and cloister at Moissac are classified as a World Heritage Site by UNESCO under the title of “Routes of Santiago de Compostela”n

The Romanesque portal, seen in this photo, finely sculpted and ornamented with a tympanum from 1120, was featured in the film In the Name of the Rose based on the novel by Umberto Eco. The sculpted figures, such as the prophet Jeremiah, are executed with a striking emotion. You can see some of this in the more detailed photo of the panels.l

030 the church roof collapsed, and in 1042 what was left was ravaged by fire. 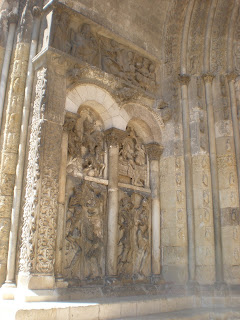 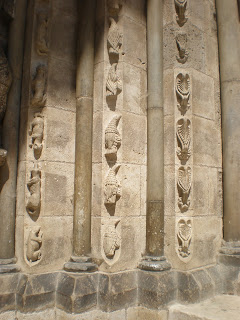 This is definitely one of the most beautiful churches I’ve seen, both outside and in but judge for yourselves from the photos. 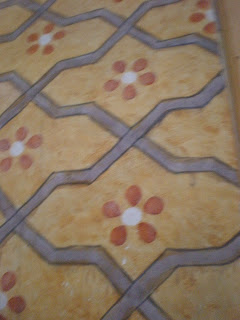 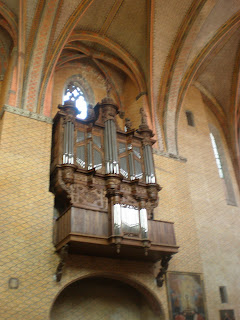 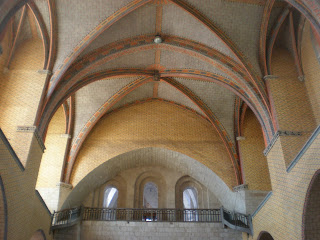 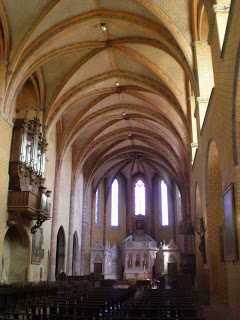 The beer in the sun went down very well, could have gone for another but we decided a shower was the priority, a good call, I feel.  Later stretched, showered and changed, we had a lovely meal next to the hotel and I had another beer, somewhat larger this time….. Celebrating time to chill, first time this section. 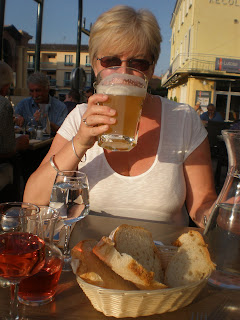