You are here: Home » » Heading for the 3 star with pool today, what a treat!

Well that was today’s incentive and after a good nights sleep, I woke early and could have had breakfast but the other two were struggling to get their act together  – sods law. 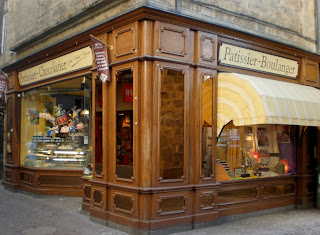 Oh well, off again and again it’s over 18 miles. Think that perhaps we’ll come earlier next year, walking in mid and high 30 degrees is not what we planned!

We’re always chirpy as we set out and our first stop was to get lunch, today bought in a very pretty little Boulangerie where fresh rolls were made up for us. We didn’t get much of a chance to see Figeac, what a shame. It has a historic centre worth an explore but we’ll have to do that some other time.

We were heading for the Cross on the hill overlooking the town where the war memorial is so of course the direction was up. 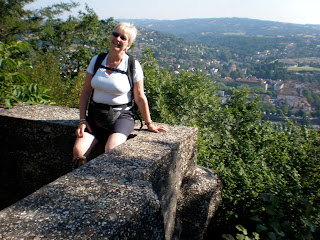 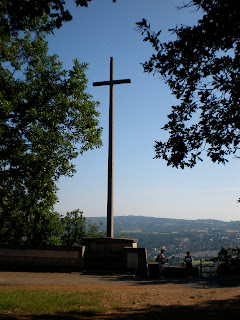 This concrete cross has on it, the names of 145 people who were deported on May 12th 1944. A sad memorial to what has happened in the past.

Great place just to stop and think and to look out over Figeac as the view from up here is wonderful.

This climb is taking us onto the plateau that separates the Cele and Lot valleys so at least we know it will be flatter at some point. but not just yet as we have a little more up after leaving the cross and then we come to a second monument, this time obelisks marking the limits of an 8th century Benedictine Abbey

5 Kms into our walk we arrive at La Cassagnole which is the birthplace of Louis the Pious, the son of Charlemagne but we don’t spend too much time here. 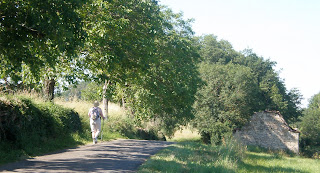 Teresa seems to have found her groove today although it’s still very hot. I think perhaps she’s started to acclimatise and often she was striding ahead. Chris and I were keeping an eye on her though and making sure there were plenty of stops and plenty of water.

Today we began to notice many little round stone huts, some in great repair as the one in the photo and some falling down. I believe they were used by farmers. 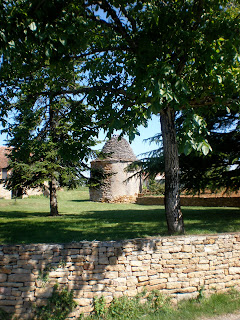 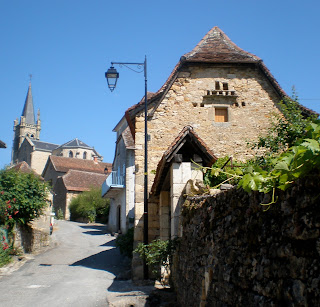 Or route today also included some industrial areas, not the most inspiring places but they did allow us to appreciate the wonderful places even more and as we walked into a place called Faycelles, we saw a house decorated for a wedding with garlands of flowers and arches all around, it was so pretty.

This, in fact, was one of our favourite places on this entire section and I still remember it so well. We passed so many lovely houses and then , quite by accident, found ourselves in a little square with a cafe and shop. We sat in the shade and enjoyed a well earned break and a lovely cool drink. Chris even had ice cream too.

A little alley from this hidden courtyard/square took us to the main village square where there were loads of people getting ready for an event which we soon realised was the wedding. We went to the church which was also decorated, again with garlands of flowers and every pew had flowers at the end of it. I think we all wished we could stay around.

On the church door we found a note pinned and it was for the three female pilgrims. It was from a German couple who were cycling and who we’d met and spoken to on a couple of occasions. How nice to be remembered.  They said they’d see us in Condom but I fear they’ll have been and gone long before we make it, still the thought is there. 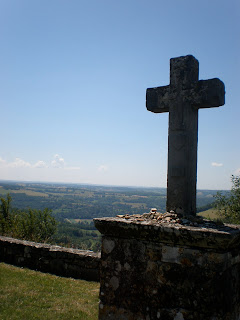 On we walked towards lunch and found a shady place to munch our sandwiches. The day was beginning to take it’s toll though as the destination seems to be as far away as ever and none of us felt we were making the progress we’d have liked to.

Views like the one in the photo of the cross do help though. This cross was set in a lay-by on a road where we were on the flat and the views out across the countryside were stunning. A great reason to stop again and look.

After Faycelles and Beduer, the landscape changes. Menhirs which are tall upright stones of a kind erected in prehistoric times in western Europe and dolmens appear, along with charming dry-stone constructions which accompany us the whole way to Grealou which is in the extreme south of the regional park of the Causses du Quercy. 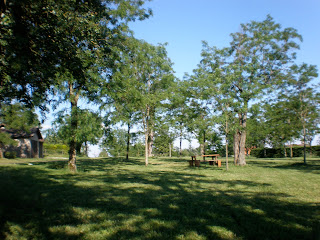 Poor Teresa was struggling again at this point of the journey although none of us were finding it easy and we still had a while to go. We pushed on to Greyalou where we hoped to find a bar where we could rest and get water but when we finally did make it, no thanks to changing signs, there was nothing. Teresa stopped on a wall looking shattered and pale and I stopped a local gentleman who at least was able to point me in the direction of a tap. There was also a picnic area in the shade so after a while I persuaded Teresa to move over to this area.

It was at this point that we wisely decided to call it a day. Teresa could not go on and there was no way we were leaving her on her own.

Now getting a taxi in the middle of rural France is not easy but at least we had a french contact from the holiday company so I called Alexandra and bit by bit we got it organised. Of course by the time the taxi/ambulance arrived – I think they were prepared for the worst, Teresa was feeling a bit better. 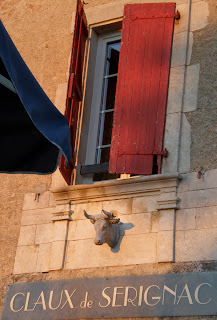 The drama was not over yet though……. This was the day of the 3 star hotel and the pool but by the time we got to the hotel it was after 6.30 and although the pool looked superb, there was no record of a booking for us. Just what we needed. To cut a long story short it was the hotel’s mistake and they had made a booking for the following evening. They did sort it though, calling around and getting us another 3 star hotel about 30 minutes drive away. We were taken there, everything sorted and it too had a lovely pool but by the time we arrived it was after 8.00 and they insisted we be down for dinner on the terrace by 9.30 so they could take our order.

This was a lovely hotel, our room were superb and all we could do was take off our boots and get downstairs, no shower, no changing. I felt so grubby sitting out on this wonderful terrace on a balmy evening and choosing from a wonderful menue. It was made even worse when they actually didn’t get round to taking the order till 9.00!! 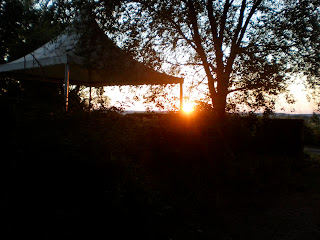 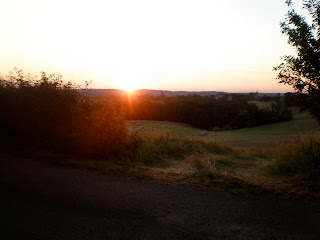 Watching the sun set, we dined on souffle of scallops and then duck, Chris had steak and then I had the most wonderful chocolaty desert of the kind Ellie loves. What a great end to a somewhat traumatic day.