You are here: Home » Uncategorized » Last day and the destination is Cahors! 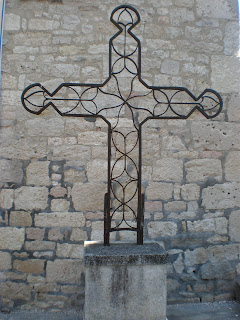 Up and ready to tackle the last day of this section and get to Cahors. Only 13 miles so perhaps we’ll have some time to explore.

After a lovely breakfast at the Lion d’Or, we visited the local boulangerie to buy lunch. The lady who worked there was so helpful and the food looked delicious so we purchased Salmon and Leek tart, Croque Monsieur and Pizza, ll freshly made of course and some still warm.

We retraced our steps taking in the market that was just setting up and took a few more photos including this one of the cross and the lavoir.

Our first task was to find our way back to the GR65 and preferably not by the same route we came here.

We studied the map and although it was still about 4 km, we choose a much prettier and not as major a route and how lovely it was to be back on the Cami ferrat. 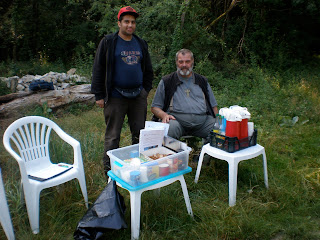 The terrain is good today as it’s much flatter and the views better so we’re making good time, it’s not as hot either.

We were on a pretty little enclosed path and we came across a sign about some refreshments for pilgrims but as far as I was concerned we were in the middle of nowhere. Then I could hear voices but was I imagining it. Not so, as we came into a clearer area to find the guys in the photo.

They set this table of refreshments up regularly during the warmer months to provide drinks and biscuits and what a lovely surprise it was. They wanted to know where we were from as they record the stats of the walkers. They were very happy to take a photo for us too. 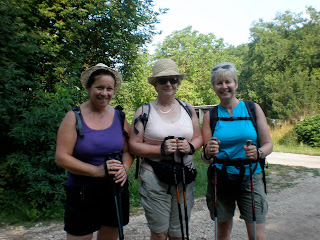 It was a very pretty area that we were now walking through as you can see from the next few photos. 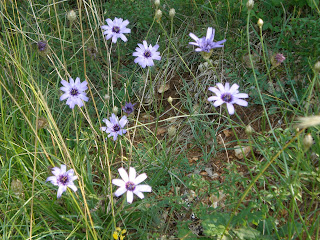 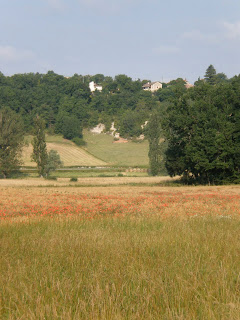 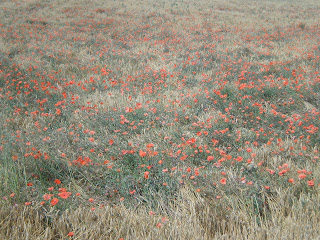 The fields of poppies were much more stunning than they look here. 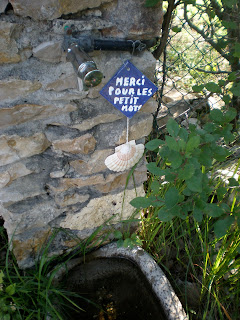 Teresa and I were been eaten alive today by mosquitos after having had no previous problems at all and at one point we had to cross the A20, a very major road , not nice at all and bringing too much civilisation. It also brought too many mossies to add their bites!

After speaking to some other walkers earlier in the day, we had been warned about the water tap at a house just after the motorway. A good thing too otherwise I would have missed it and we really needed to take on more water.

At this time in the day we were beginning to look for a good place to lunch and we ended up at a spot on top of the plateau, described as “one more wild plateau before the descent into handsome Cahors”, with wonderful vistas all around. There was little shade today but thankfully it wasn’t a problem as it was overcast although warm. At last the chance to eat all those tasty things we’d bought this morning.

After lunch the downs started, stony – so lots of need to be careful and steep. Here Teresa and Chris try to keep going and keep from falling. 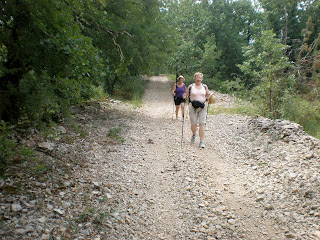 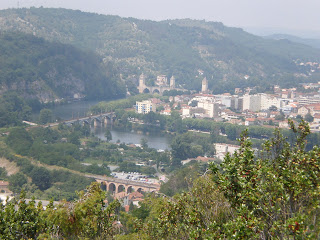 We’d been told that you can see Cahors from some distance away but we kept looking and wondering where it was, it was taking ages. At first it was a glimpse through the trees where we saw very little. Then no view, then more and more was revealed. My most exciting view was when we could actually see the beautiful bridge, the Pont Valentre.
As we got closer we could see the old town on the other side and pick out the cathedral  which seemed huge.

Now we were off the paths but the going down was still steep, poor knees and thank goodness for the walking poles. 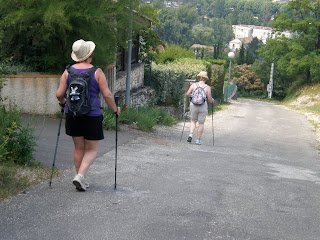 We weren’t too sure where the hotel was and we knew we were coming in on the other side of the rever from the main town but something made me glance to the left and there was our hotel right on the river. We were able to go and check in, leave our stuff, take the boots off and put the sandals on and go explore.

It was so lovely to wander freely with no real plan, apart from the need to have a beer of course and celebrate our arrival in Cahors and the end of yet another section of the Camino. My favourite beers, Desperado, were on the menu so I introduced everyone to them. 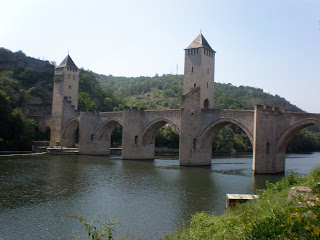 From here we walked up to the square and through the main road heading off to the bridge.

This is the one attraction in Cahors that is unmissable,  the famous bridge, the Pont Valentré. The bridge, built in the 14th century, has three towers each with large arched gateways due to its historical role as a defensive bridge, and a couple of places where you can sit nearby with your picnic and admire it. The bridge is also recognised to be important enough to be listed as a UNESCO World Heritage Site. 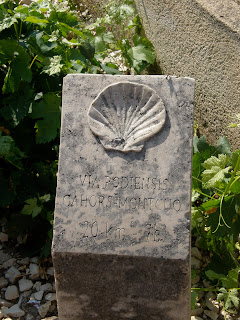 Love this beautiful shell on a pillar just before entering onto the bridge and marking the way of the pilgrims.

This next photo was taken by me of Chris down below when I rashly decided to climb to the top of a long flight of stairs, it was quite a view. 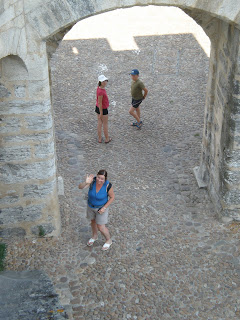 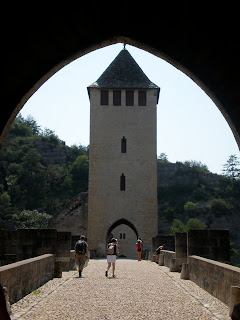 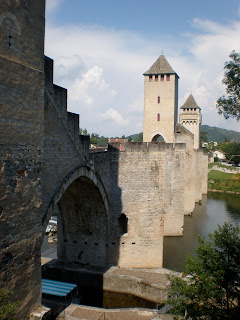 This view is from the opposite side of the bridge looking back and it’s here, on the other side of the road, that we discovered that this is where the GR65 continues as it climbs up and out of Cahors. At this moment I was very glad I’d fnished but is nice to know where you’re going next.
One of the things that Cahors is best known for today is it’s famous AOC ‘black’ wine known since the Middle Ages and we were to have some of that with dinner. It’s been exported via Bordeaux long before that region had developed its own viticulture industry. 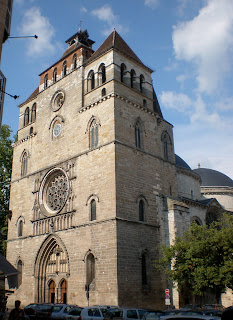 Having crossed back over the bridge again, we walked straight across so we could go and visit the cathedral of Saint Etienne which is a lovely example of gothic architecture. The cathedral is also home to a museum of religious art, interesting murals and tapestries.

I was taken aback at the size of it and the vastness on entering. We wandered round each exploring the areas of greatest interest to ourselves and then moved out into the cloisters which are very beautiful.

As you can see I took a number of photos in and around these. 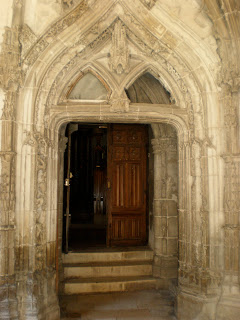 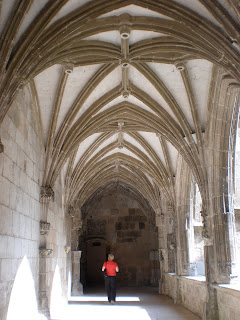 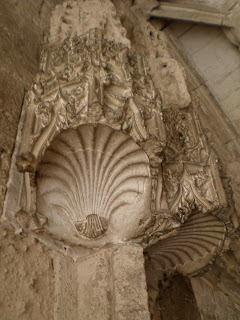 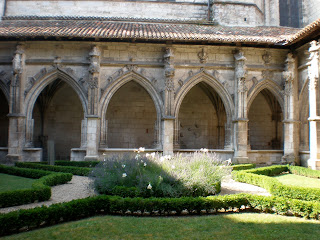 From the cathedral we let ourselves walk further and into the narrow streets of the medieval town which dates back to the 13th century and  grew with the arrival of bankers and merchants into the town. They built fine houses, usually of brick, often with arcades for their shops.

Good examples can be found in the Rue Nationale, Rue du Chateau du Roi and the Rue des Soubirous.
Parts of the original ramparts can still be seen in the north of the town along with the Barbacane and the Porte de la Barre.

We were hunting for Rochmadour cheese and came upon a wonderful fromagerie where no Rochmadour but other wonderful cheese which we bought to take home.

Then it was back to the hotel for showers and some rest and relaxation before a wonderful dinner which for me was fois gras followed by scallop risotto and finished with a brioche desert, all washed down with the local malbec merlot rose. All eaten out on the river terrace and followed by a night of very little sleep due to the heat.