You are here: Home » » Last day, Auvillar to Lectour

Not surprisingly, there was a fabulous breakfast today and the Pain au Chocolate was too good to leave so had to take half of it with me for later.  Sad to leave but I’d love to come back to this hotel some day…

Off at 8.00, our last day and we bought quiches at the Boulangerie and Olive Fougas which is like Foccacia. 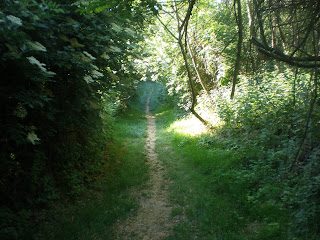 We knew we would be road walking and weren’t looking forward to that but it wasn’t bad at all. Most were minor roads with good views so plenty to see and admire. There were also some grassy and shady lanes to walk along.

We’d made the decision that as this was a very long final day, we’d stop regularly so we did. First in Bardigues, then St Antoine, Flamerens and then Miradoux. In most places there was a tap to refill the bottles and a WC and we had food with us. 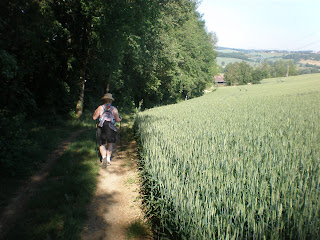 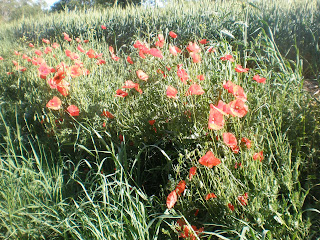 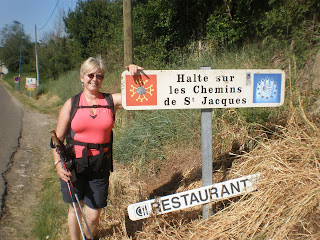 In Saint Antoine, which takes it’s name from the religious order of the Antonins, after visiting the beautiful church, we stopped at the Gite E’tap so I could use the loo and while enjoying a drink in the sunshine, got talking to a guy who’d worked in Bradford for a while, he was in the weaving industry. He was suffering from blisters so Teresa gave him compeed for his foot.

This section of the walk this morning was a bit of a convoy and made us wonder if it would be more like this when we got to the Spanish part. It was made up of small groups and singles too. This was the pattern as far as Miradoux and then after that we saw no-one. It was as if everyone knew it was going to be ‘bloody hot’ and they stopped. Everyone had commented on us going the ‘whole way’ to Lectoure. Well, that was our destination so no choice. 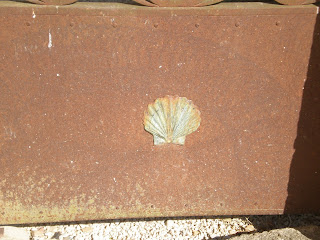 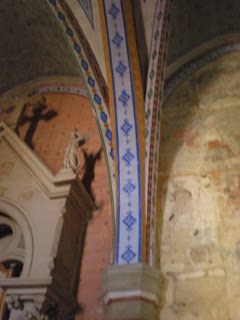 Along the way, we visited numerous churches, all with these wall paintings that we’d seen in Moissac, rather like wall paper but painted and they were all so well protected.

Apparently at the correct time of the year, this undulating countryside is a mass of sunflowers, all turning their heads to the sun en mass depending on the time of day. That sight has yet to come this year but we’ll be long gone. Sad.

We had hoped for a good stop in Flamerens as we knew there was a castle there. It’s currently being restored and is 12th – 15th century. The castle was partially destroyed by fire in 1943.

There was a sign for a cafe but not to our taste at all and not at all in keeping with this beautiful monument. Instead, we sat at some picnic tables in the shade, saved ourselves money and had a lovely break. 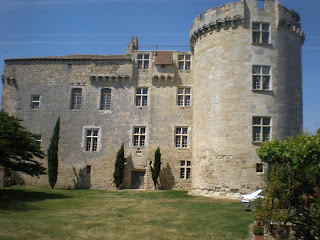 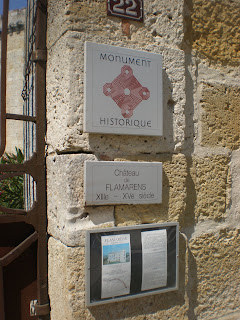 By the time we got to Miradoux, we were knackered and we went to the church for some shade. It was really cool and we really, really appreciated it. This church is gothic and has an unfinished bell-tower. The village is at the border of Tarn-et-Garonne and of Lot-et-Garonne departments. 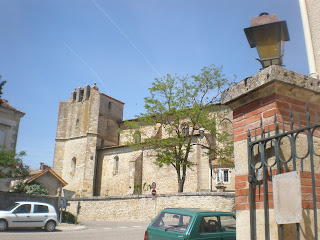 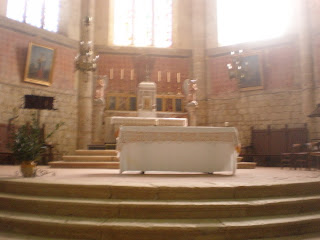 The benches round the church were in the shade but all occupied and we needed somewhere to have our picnic. We found an area set up for picnics , well signposted and behind the Salle de Fetes. There were loos here too and we’d filled our bottles up at the tap near the church so we could relax and enjoy our lunch break.

About 50 minutes later, stretched and re-charged, we set off again into the mid-afternoon heat. 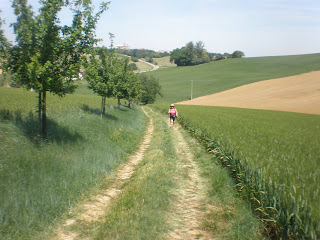 I love the farmers who’ve allowed their fields to be used for the “pilgrim paths’ so we can be taken off the road. It makes the walking so much more enjoyable and also safe and we could see where, in years to come, others will truly benefit from these paths which will then be shady once the vegetation has grown up. Some are so new now that shade is missing but hey ho, you can’t have everything.

We’d been led to believe that there would be lots of itinerary information on these sections, there was very little. We saw one telling us that it would be 1hr 15 mins to Castet-Arrouey and we covered it in about 55 mins but from there it suggested 2 hrs 30 to Lectoure and although we did slow down, it was more like 3 hrs 30. There was no one else around at all, hot, hot sun, no signs and therefore no idea of where we were or how much progress we were making. 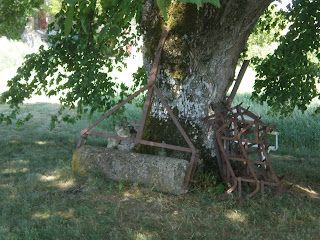 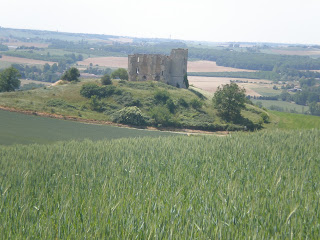 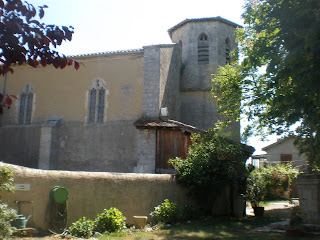 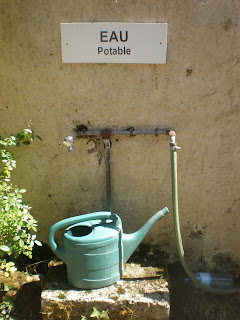 When we did finally see Lectoure it seemed as far away as ever and my feet were so achey. All went well at first and at least we were off road but then we turned right and I began to realise that there was a gorge like valley between us and where we wanted to be and of course this means a down and an up!!! 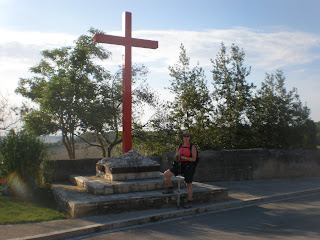 The down wasn’t too steep and I could see that the up was at least at a slighter angle but oh, I ached and when we stopped at the cemetery it seemed as if I ached from all parts of my body.

At last we made it to the top, it didn’t take that long, it just felt like it and we took photos at the cross. Another opportunity to stop and to get our bearings and thankfully we saw a sign to our hotel but of course circumstances got the last laugh as once we found it, we had to go uphill and to the right to find the entrance.

We had seen photos so knew it was going to be a nice hotel but nothing prepared us for how lovely. Hot, achey and tired we entered through this small door into a beautiful courtyard where the terrace was set for dinner and Francoise, that glamerous French lady who turned out to be from Belgium, sat sipping an apperatif. We spoke briefly and then went to check in and get showered.

Our room was of course on the 2nd floor and up very rickety stairs to what one was servants quarters but it was a lovely room under the eaves and had everything we needed. We stripped off the sticky walking gear for the last time this section and grabbed showers arriving down to dinner as different people. We were placed beside the jasmine with a view over the pool and enjoyed a wonderful meal. We started with raw salmon, with asparagus and guacamole and beetroot puree. Then had a main of duck which was huge and beautiful and served with ratatouille and the desert was layered strawberries, dark chocolate and cream, light and so tasty. All was washed down with a bottle of Gascony red and the feeling that ‘yes’ we’d done it.