The next section is now booked, how exciting is that? Teresa and I head out (from Gatwick this time) to fly to Toulouse on May 5th to walk the next part of this fabulous trail.

Our trip sees us start with an overnight in Toulouse and much of the next day there too due to plane and train times but this gives us a chance to relax and explore a new city for both of us. No doubt wine, food and coffee will play it’s part as we wander the streets of this Southern French city. Then in the late afternoon of the 6th we catch the train to Cahors. 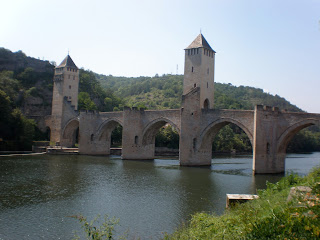 This is one of Cahors iconic sights, the amazing Valentre Bridge spans the Lot River and was built in the 1300′s. It is considered an exceptional example of medieval defense architecture.

As we walked down into Cahors at the end of the last walk we could see it clearly from some distance away and it was, in fact, the only thing I knew about Cahors at that time.

It is one of the most photographed sites in France and is listed as a UNESCO world heritage site.

The foundations of the Pont Valentre bridge were laid in 1308, but it was not completed until 1378 and legend has it that the bridge took so long to build that the architect got frustrated and sought the devil’s help in completing it, promising his soul in return.

When the bridge was nearing completion the architect had second thoughts and bet the devil that he could not bring water for the last batch of mortar in a container of the architect’s choice. The devil accepted the challenge but the architect chose a sieve so the devil lost the bet. The devil was so annoyed that once the bridge was completed he broke off one of the stones from the central tower every night forcing the townspeople to constantly repair it. That’s a way of getting your own back!!

When restoration work was carried out the architect (Paul Gout) heard of the legend and replaced the missing stone with a sculpture of the devil which is still visible today. 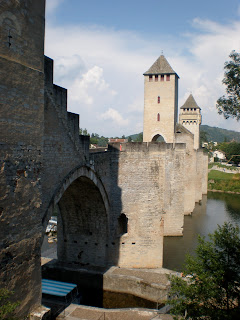 After checking into our hotel and having that cooling beer, we headed off to have a look at it and discovered that our walk in May will take us across the bridge and up a steep climb just after we come off it on the other side.

The sight to our right will be what we’ll see as we look back from the other side of the bridge. A few worth savouring as we make sure we are composed for the climb up. Somehow on this walk, we always start off climbing out of a valley, guess it’s because most settlements are down there. I’m sure regular stops on the climb up will be needed so we ensure we get a great view of this wonderful bridge at all stages….. Well, at least that’s my excuse. 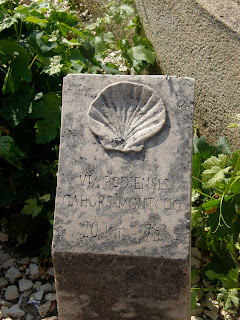 On the left, a beautiful scallop shell crafted into the stone to indicate the Via Podiensis which is the route travelled by pilgrims starting in or passing through Le Puy-en-Velay which is where we started in Sept 2008.

It’s also the GR65, the first French route to be created, and is currently by far the most used.

Walking trails like this does give you a taste for doing even more of them. The GR20 has always appealed, that’s the one
that traverses Corsica diagonally from north to south. It’s 180km long with variation in height of about 10 000 metres and can be walked in 15 days.  It’s known as the toughest long distance trail in Europe so perhaps some more intense training may be needed!!

One Response to “Look out Camino, here we come.”