You are here: Home » Uncategorized » Montreal sue Gers to Eause 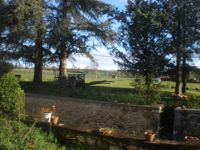 Woke this morning to sunshine and blue skies, I had to take a photo straight away as I was so surprised and delighted.

Breakfast was traditional with coffee drunk from a bowl, love this and loads of fresh bread and jam and then it was time to pack up, say farewells and to get another stamp for our notebooks, interesting that this happening now when we had never been aware of being able to get these so easily before.

Just before we left, we went to see the garden and also to see the ducks which were making such a loud noise. How surprised were we? No ducks at all but frogs, what a loud noise for a relatively small frog! 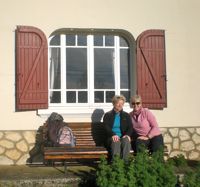 All ready to hit the road again. 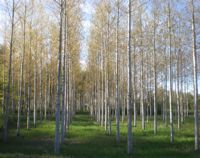 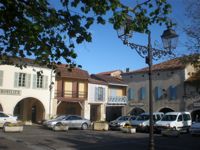 We walked back along the road into Montreal, enjoying the sunshine and took the more picturesque route to the square which was busier with everyone getting their break, gateaux etc. Our purchases were fresh bread, goats cheese and pate, a little of a pattern this trip and so tasty.

So enjoying walking in the sunshine and feeling that warmth, plenty of mud to slide in too but generally very happy this morning…that was until this b****y dog decided to take a bite out of my calf. Now I know it’s tasty but! 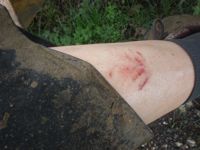 Damage done to my leg by said dog.

I got such a shock. All we were doing was moving through along the lane that passed by this house. The dog had barked and made us jump but as we negotiated the mud I thought it had gone off to do it’s own thing and then I felt this nip. I told Teresa and just walked on but then it began to get more and more painful and a little further down the track I stopped to have a look and my leg, where it had grabbed me, was rather black and red. At this stage I was sure that it was just a nip but when I stopped again later on to apply some antiseptic, I could then see that it had broken the skin.

Well at least the sun continued to shine and we were on a good path, an old railway line. Here are some of the photos from that section, mud included. The last one is the tower at Lamothe, mentioned. 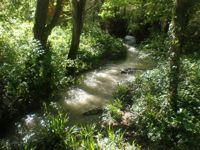 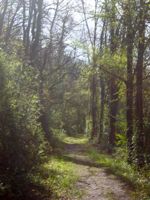 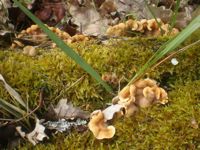 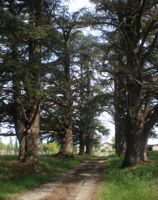 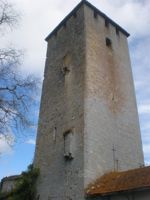 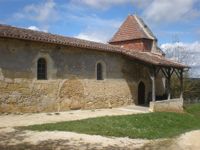 At Lamothe, we clambered up to the tower that we’d been able to see for miles and found a shaded picnic bench near the church to have lunch. Sadly the church was closed. Puzzled by the empty bottles of wine on the barrels outside. Two French guys joined us for lunch.

Downhill past the church once lunch was over and back onto the railway line for about 7 Km and virtually into the centre of Eause. 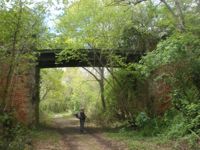 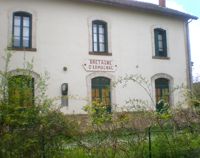 Some big sporing event happening but at least we were going the opposite way.

Eause centre is pretty so we visited the church and then positioned ourselves in the sunshine to enjoy that first wonderful beer of the day and work out where our hotel might be. I hadn’t been able to find anything out from my explorations before we left. 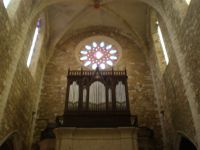 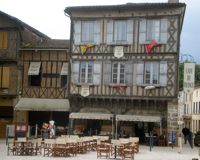 Just the place for a beer in the square

Finding the hotel Triana was relatively easy, sadly it wasn’t very appealing. The room was basic but at least it had heat and hot water. No curtain on the shower so the entire bathroom got wet and we had a back room so looked out on a dismal courtyard. Still we went off for dinner forever hopeful. Too hopeful – stale bread and ham to start followed by steak frites. Now my steak was great but the frites were so greasy I couldn’t face them at all and the lady of the house was somewhat shocked that we didn’t eat them. I had just said to Teresa that if we get tinned fruit that’s it when yes, we were served tinned fruit. Say no more.

Looking forward to moving on in the morning.