Up early as this morning we were leaving so we had breakfast with Francoise and the Australian lady who we met at dinner last night and who lives in Sydney, in the same area as Karen and Anthony. It was a nice breakfast but the pain au chocolate where not a patch on the day before.

The day promised to be interesting travelwise and started with a 40 minute bus journey to Agen and from there we took the TGV to Toulouse. What could have been fraught with challenges went extremely smoothly with time in Agen for coffee. 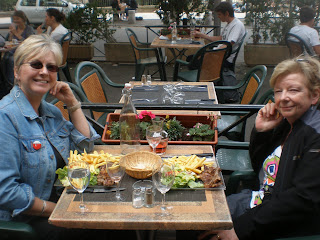 Although Toulouse is not my favourite place, it was really good to know where things were so we first stopped at left luggage and got the bags taken care of, then purchased the bus tickets to get us back to the airport and after that were able to chill.

We had a few hours to pass so decided to head back towards the basillica and once there, the little restaurant we’d eaten in the first night was bathed in sunshine and had a few free tables so we settled there and had a wonderful lunch as the photo shows.

After lunch we had a last wander up to the square where Sephora was visited to buy pressies and then back to the airport where I saw good the bet I lost and bought champagne for both of us, delicious.

It seems that we are now 2 sections away from the French/Spanish border so here’s to completing two sections in 2012 and then being able to move onto Spain. In the meantime, we have ‘The Way’ to watch.