You are here: Home » Uncategorized » Onwards to Figeac

Teresa was feeling all the better for her long sleep last night but as temperatures were still high, we agreed to amke sure that we did all we could to prevent more of the same.

We started about 8.15 and retraced our steps to where we entered Decazaville the day before and picked up the signs. 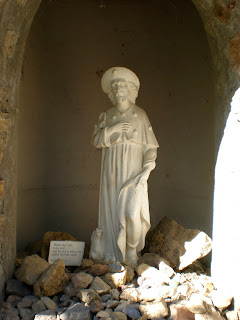 We stopped briefly at the Eglise Saint Roch where an old man told us stories of the church and the people and of course, the Camino.

This was a lovely statue of St Jacques at a roadside shrine where we choose to stop for a while before moving on down a lovely shaded path. It was steep and stoney in places so you had to be very careful as to where you put your feed. Very grateful for our walking poles at this stage.

Not far from the end of this path, we emerged out into open space to see the River Lot ahead of us. For Teresa and I who had wlked along it and crossed it on more than one accasion on the last section, it was like seeing an old friend. 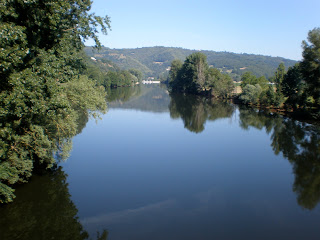 Our route took us across the Lot and into Livenhac-le-Haut where we took full advantage of a pretty little cafe in the square to take a break. We were something of a novelty, although they must see plenty of pilgrims here so we had numerous conversations and were even joined by the former Maire who was filling us in on who the different people in the village were. It was rather an entertaining break.

Montredon, which means ‘the roundmountain, ‘10 kms from Conques was our next stop which was planned to be lunch but until then 4 kms of paths, roads and tracks and all in very hot sun. It was full of strenuous climbs too as we crossed into the department of the Lot. 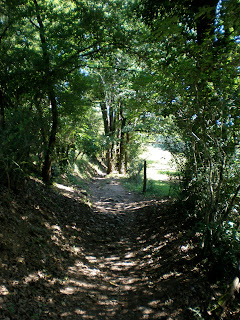 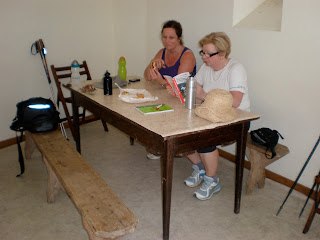 As we approached the centre of Montredon , all the seats in the shade were taken and we were rather wondering where we were going to have lunch  but then we noticed a sign directing pilgrims into a hall beside the church.

What bliss, a cool and shaded space offered a table and chair and cool water for us so we enjoyed the food that Teresa and Chris had chosen earlier and had a good 35-45 minute break, filling up our bottles and preparing ourselves for the next stage.


During the afternoon we had great views, difficult to capture these panoramas though, they need to remain in our heads and hearts rather than on paper but it was a long afternoon. 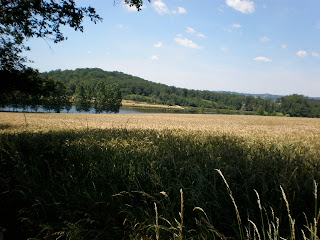 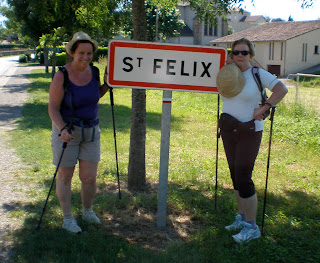 After reading in the book about St Felix, we made a commitment to making this our next stop. At least it could motivate us. It was so hot though and at times every step was draining. We were also getting concerned at this point about running out of water and hoped that St Felix would offer us the opportunity to fill up.

It didn’t disappoint, there was a tap, a loo and in the Romanesque Church of Saint – Radegonde there was shade, cool and calm. There was dear St James looking down at us from a stained glass window, as always keeping us safe on our pilgrimage.

I recall vividly the 1.5 kms we walked after leaving Saint Felix as it was along a long straight road which seemed never ending. How I hate long straight roads. The only thing to break the monotony was this lovely poem carved into a slate and mounted on the wall of a house we passed. Thanks to the person who wrote and presented it. 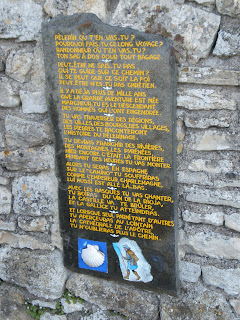 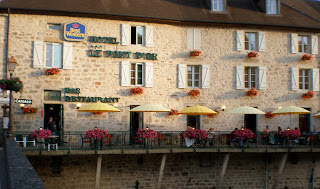 At last Figeac and 7.00 o’clock at night. We had a little trouble first finding the hotel and of course this would be the night that we had to go out and find a place to eat. At least we were near the centre so after quick showers we went out to explore. As it was a balmy evening we wanted to eat outside and not far away beside the River Cele we came across a lovely terrace restaurant, part of the Best Western Hotel.

It was a lovely meal, a couple of us had steak and our young waiter was very entertaining and was enjoying practicing his English. He was pretty good at taking photos too. 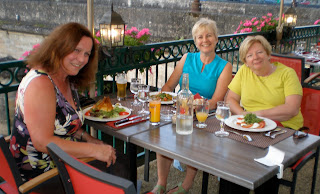