You are here: Home » » The day we walked from Nasbinals to St Chely d’Aubrac

This was one of the views from our bedroom window, just look at those wonderful overlapping tiles. 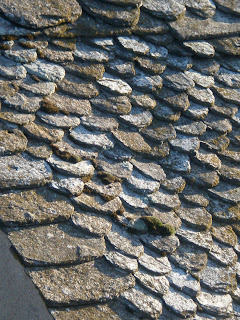 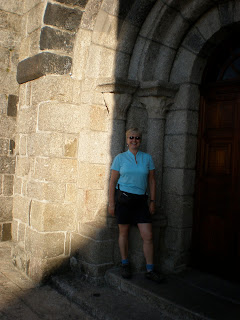 After breakfast and having bought quiches from the local shop, we stopped to visit the11th century Romanesque church built in local sone and style. There is a monument, with a pair of crutches at its base, in the church to Pierre Brioude a 19th century ‘bonesetter’ and manipulator of joints who is said to have treated over 10,000 people a year. I’m sure many pilgrims will have needed his skills. It’s rather like having my friend Ivana on hand.

Shame I’n in the shade as opposed to the sun but just proof that I was there.

Just on the outskirts of Nasbinals, our turn off the road took us into wonderful beech woods and we walked through a tunnel of these until the track opened up and hedges took the place of the trees. It was time to stop and strip off the top layer here, it never takes long. 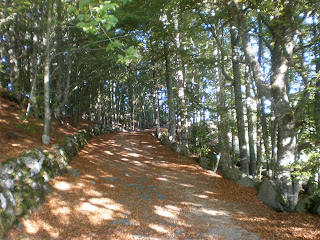 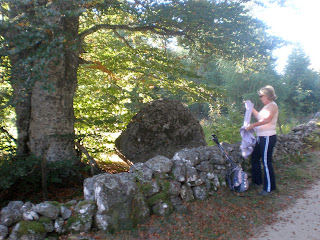 Gravel paths, rowan trees, small streams, all these wonderful aspects of the walk just add to the glory and enjoyment of the day. 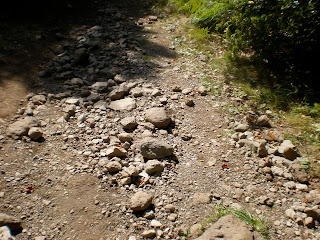 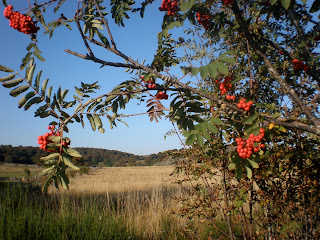 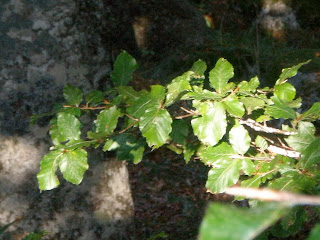 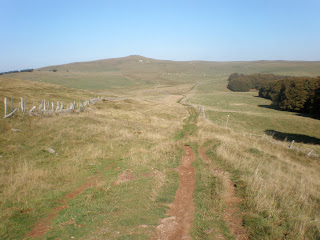 We were now back on the Aubrac Plateau and for this we’d made sure we had our sunscreen, hats and plenty of water as shade is at a minimum. Often when I can see miles ahead I get bored but somehow not on this plateau, I was loving this open space and spotting things of interest like the Buron de Ginestouse Bas which is a bothy used during the summer months by the shepherds as they spent the time up on the plateau not returning to the valleys until the autumn.

Above us on our right we could see the Blunt, cone shaped hill called Trois Eveques marking the borders of the departments of Cantal, Lozere and Aveyron as well as the old regions of Aveyron, the Aubrac and Midi-Pyrenees. Quite a lot happening in this small place then.

I mentioned signage in the past and I love the inventiveness of those responsible for this aspect of the Camino, just had to get Teresa to pose beside this one. Anyone have any idea where the path has gone? 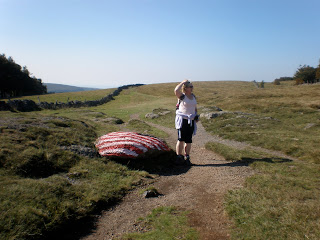 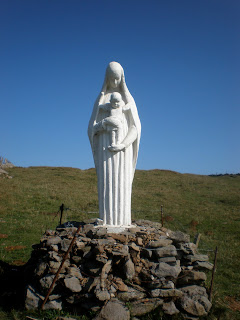 Our descent from here gave us a view over to our right of the ‘Village de Vacances Royal Aubrac’ which used to be a sanatorium, a sculpture of the Virgin Mary and Aubrac itself.

As we walked down here I did recognise it from the car journey on our way from the airport. At the bottom of this hill the road turns a corner and I remember looking up not realising of course that this was the way we’d come. It’s really rather interesting when it all comes together in this way

On to Aubrac in a moment but one of the sculptures or pieces of artwork inspired me to get a little carried away and below are a number of the photos I took. 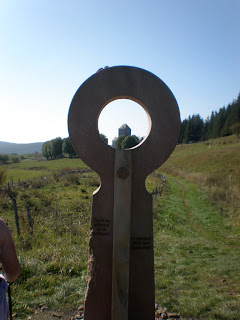 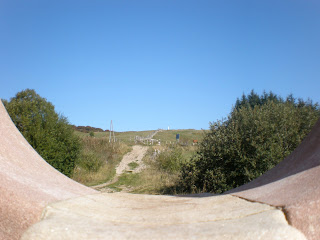 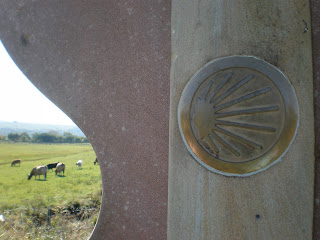 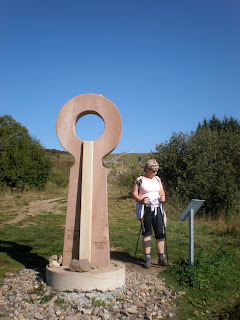 I wonder if we can get a coffee there, I recall asking? 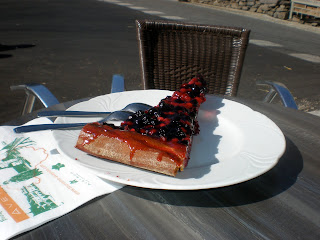 Well what a coffee and more. Do you remember me mentioning the taxi driver telling us about the tarts? Well as we approached the village I suddenly recognised it and this is the tart. Now how could you resist?

We were all set just to have coffee but having gone to find the loo, Teresa returned saying we just had to have some tart so we did but only one piece between us. As you san see it was huge and we took over half and hour and two cups of coffee so leisurely work our way through this masterpiece. It was wonderful and  the whole setting just added to us plus at least we felt we’d earned it.

The food throughout the restaurant looked fabulous and I took a mental not to bring Alan her sometime to dine on one of those times when we can take off and drive through France. 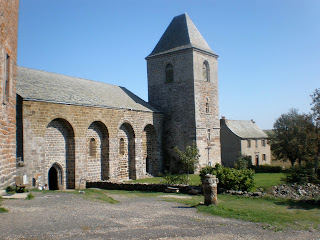 Before leaving we did the historic bit. This village was founded by a Flemish Knight who was attacked by bandits on his way to Santiago and who almost died here in a storm on his return journey. We visited the Church of Notre Dame des Pauvres, see the photo, which is all remains of the monastery that used to be here. We also visited the botanical garden, the new visitor centre and took photos of the Tour des Anglais.

In this village there is a great fete every year on the penultimate weekend in May. It’s called the fête de la transhumance which is an ancient tradition that almost died out but was resurrected 30 or so years ago.

Hundreds of cows and thousands of people descend to celebrate the movement of the cows up to their  verdant pastures, studded with wild flowers and crossed by clear streams. The herds are decked with headdresses of holly and wild flowers and hung with cowbells and are driven up from the village until the Autumn. It’s something I wish we could see but we did get a flavour from looking at some of the photos.

On the outskirts of the village we turned off to our left passing a tall wooden cross and walked downhill on an uneven track. It was good to be moving again and walking off some of that terrific tart. Lunch was going to have to be a long way away if at all!!

Along this way we met a large group of walkers and continued to meet them off and on for the rest of this section of the camino. One of the men seemed to have got separated from the rest of the group and we got talking to him. He’d been beset with blisters and was in some pain as he hobbled along. He was in good spirits though.

We came across some great wildlife this time like the lizard and this huge bug. 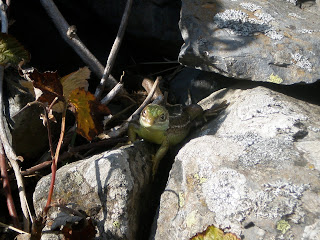 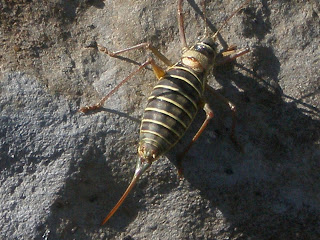 Not sure what that bug is so open to advice but I wouldn’t like to get on the wrong side of it.

Again we got to St Chely d’Aubrac in time to enjoy that beer and once showered and changed, we went for a wander round the town and visited the local tourist office which had some great information and photos. Outside was a wonderful metal sculpture of the scallop shell adorned below with vibrant red geraniums. 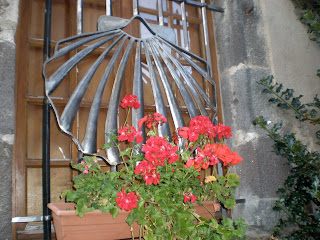